In 1898 a cricket team was formed from amongst the residents of Birkenhead. The members of this team were mainly employees of the Chelsea Sugar Refinery but their meetings and social activities were firmly based in the village of Birkenhead, which had become a borough 12 years earlier, with a population of 1000. The present Zion Hill Methodist Church, the old Gladstone hall in Hinemoa Street and the old Foresters’ Hall in Highbury were used by the club for meetings, dances and concerts. For practices and local games the players used local fields near Highbury and went further afield by ferry from Birkenhead Wharf to Victoria Park and the Auckland Domain.

It was a very different Birkenhead back then – horse-drawn traffic, gas but no electricity, and rough roads paved with ash – a waste product of the sugar refining process at Chelsea. “King Dick” Seddon was Prime Minister, and the Main Trunk Railway was yet to connect Auckland and the capital, making it necessary for local MPs to travel to Wellington by ship. A few motor cars were beginning to be seen in Auckland, smoking was in fashion and W.G. Grace had just turned 53. At the sugar works you worked up to 59 hours a week, possibly qualifying for the first state-provided old-age pension.

Cricket was definitely the most popular summer sport in New Zealand, and Birkenhead would have shared in the cricket fever that accompanied the first New Zealand representative cricket tour of Australia in the 1898-99 season. The players acquitted themselves well in Tasmania, but were easily beaten by Victoria and New South Wales – in this match Australian Victor Trumper scored 253 runs!

The enthusiasm that surrounded the formation and organisation of the Birkenhead Cricket Club can be gauged from newspaper reports, which almost form a Who’s Who of Birkenhead at that time and show clearly the social range of its membership. The players were fit young men who built up their muscles every day stacking sugar and loading lighters at Chelsea or working in the strawberry fields and orchards of this rural district, while the officers included a member of Parliament, the Mayor of Birkenhead (also a judge), the Chelsea Sugar Refinery Manager and local businessmen. In later life many of the players were to become interested in local government and made large contributions to Birkenhead’s welfare and development.

The Auckland newspapers reported that in the first year of play (1898-99) the team won seven, lost seven and drew one of its 15 matches. Henry Stewart, the club captain, headed the batting and continued to do so for some years, while the McPhail brothers’ and J. Wrightson’s brilliant bowling was constantly admired. In 1894, Henry Stewart was employed by the sugar company “trimming coal to the burners” and in 1921 he was still working hard as a lighterman loading and unloading the sugar boats. J. Wrightson was a brickmaker at the works and the McPhail brothers of whom John had the best bowling average and James the most wickets, including a hat trick, had been employed there since their mid-teens.

Fred Osmond, Henry McCarthy, David Heron, the Riddells and the Ripleys were also on the sugar company’s payroll. 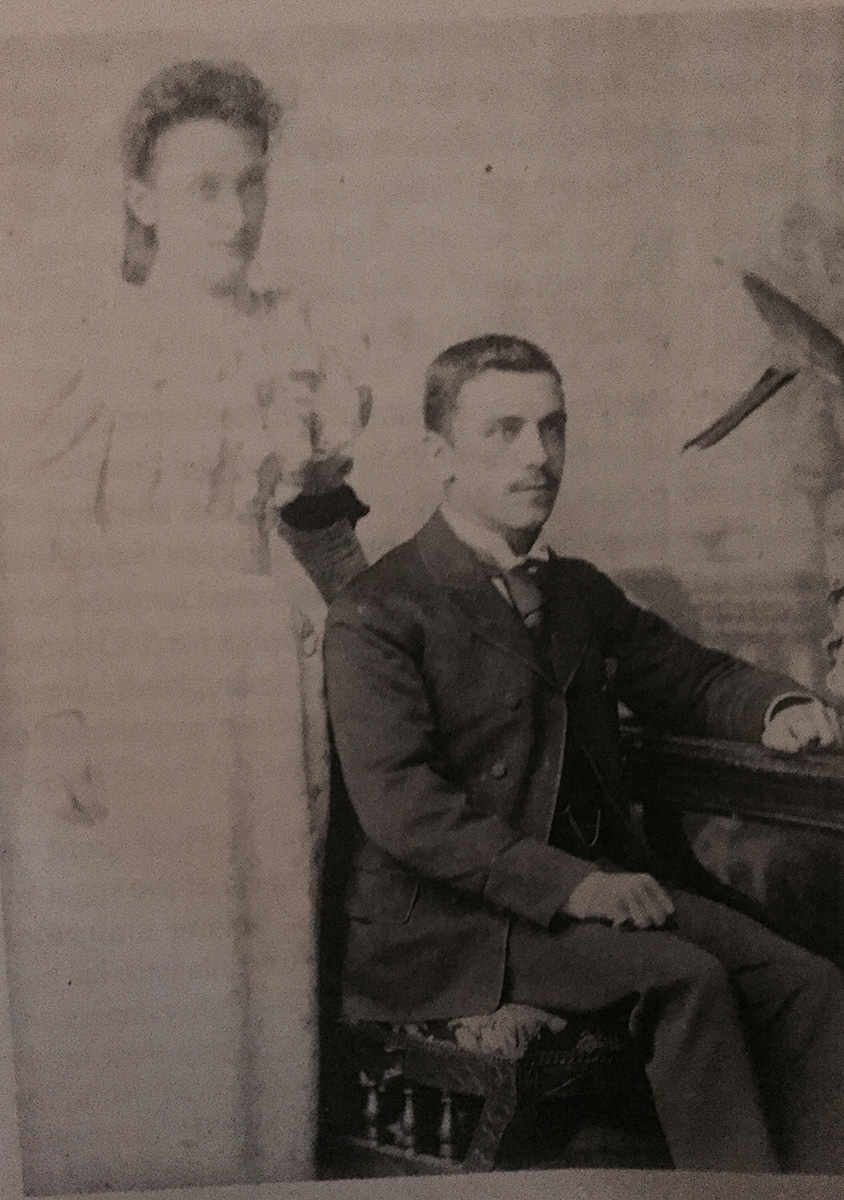 James McPhail with his wife Ethel in the early 1900s. Bowler James and his brother John played for the club well into the century and John’s family lived in one of the old brick Chelsea sugar houses.

At a social gathering in the Gladstone Hall in 1900 the club President, the first mayor of Birkenhead, Charles Button, presented the team with trophies. Henry Stewart and A. Wrightson were given bats (presented by Mr Henry Taylor and Mr Alex Riddell senior.) James McPhail and James Low were given sashes, the former for best all-round player and the latter for the most catches. Their sashes were presented by Mr James Stewart junior and Mrs Henry Stewart and … “dancing, games and singing were indulged in until midnight”.  The music was supplied by Mrs McCarthy, the wife of Henry McCarthy, a keen member of the Birkenhead Dramatic Company and another cricketer who worked at Chelsea as an engineer. From the Riddell family (who organised this glittering occasion along with the McPhails, H. Stewart and J. Peacock) Alex Riddell was a councillor from 1899 to 1915.

The club was admitted to the Auckland Cricket Association in 1901 and in that year in a 4th Grade match against Wakefield, James McPhail bowled well for Birkenhead bagging six wickets for 30 runs,  including a hat trick.  From this era came a newspaper cutting that James pasted into his scrap-book: “On Saturday afternoon, in Victoria Park, a young fellow was noticed rifling the pockets of the clothes of cricketers about the ground. Mr James P McPhail of the Birkenhead Cricket Club, gave chase, and was eventually successful in capturing the thief, when a purse, with 30 shillings in money, was recovered, though the man was not detained. This should be a warning to cricketers and others who leave their clothes about, containing valuables, whilst engaged in their games.”

In 1904 at the club’s annual meeting in the Zion Hill schoolroom (at the Methodist Church on the corner of Onewa Road and Birkenhead Avenue) James McPhail presided and presented the secretary-treasurer Fred Osmond with a silver mounted pipe and case for services rendered. The club had played eleven matches in the last season of which it had won three and lost eight. A fund raising concert had helped pay for the wicket and Johnston’s paddock was leased for three years. A patron was the MP , Mr Ewen Allison (the owner of the Devonport Steamship Ferry Company) and the Vice Patron was E.V. Miller the manager of the Chelsea Sugar Refinery. Henry Stewart was once again the top batsman, with the new captain W. Meredith a close second and the McPhails again bowling well.

The McPhail brothers’ energy lasted well into the century. John McPhail spent his working life at the sugar refinery, having emigrated from Australia with his parents, his brother James and his sister, when their father was transferred from the Colonial Sugar Company in Melbourne. Later he and his family lived in one of the historic brick houses belonging to the works, which are still standing today. His sporting interests included Rugby which he refereed at the Auckland Domain, taking his wife and young daughters to town on the ferry from Chelsea (often wheeling the pram across a sugar boat unloading at the wharf to gain access to the gangway). He was a borough councillor from 1906 to 1909. Later he was the president of the Northcote Bowling Club and his portrait is still there in the club-house at Little Shoal Bay. When he retired from the refinery in 1930 he had worked there for 47  years first as a brickmaker, then as head pan man and finally factory foreman.

James McPhail spent his teenage years making hessian sugar bags, working in the golden syrup room, at char manufacture and as an engineer, ending up as a bagging contractor and finally leaving Chelsea to become a land agent in the city. He was a keen rugby player as a young man. “McPhail was the most prominent of the Shore backs. He ran, kicked and collared in good style.” He continued to live in Onewa Road (the old villa is still there) with his wife, Ethel Maxwell, the daughter of the Northcote publican, and their family. In 1915 he became mayor of Birkenhead and again from 1929-32. His energy and commitment can be seen from the number of boards and committees he served on and he is remembered for his work to help people during the 1918 flu epidemic and the depression. Hinemoa Park at Birkenhead wharf was formed and planted during his early years as mayor. He was chairman of the Northcote District High School Committee, a member of the Auckland Education Board and on the Seddon Technical High School Board of Governors.

Birkenhead’s founding orchardist families were represented in the first team by the Wilson brothers. James and Charles Wilson were two of the fourteen children of Elizabeth and Alexander Wilson who had built the third house in Birkenhead on a hundred acres of land in Glenfield Road where they established an orchard and market garden. James Wilson began a fruit and produce business by taking his produce in a pushcart to the Auckland markets on the ferry. Later he exported strawberries to Australia (They were packed into the ship’s lifeboats!)

His daughter-in-law says of his cricketing interest: “All the time I knew him he was intensely interested in the game, listening on radio and then TV until the day he died at 97.”

Exactly what happened to the Birkenhead Club after 1904 is unsure. James McPhail played for the Waitemata District Cricket Club in the 1909-10 season when he again scored a hat trick! (His son is the proud possessor of the commemorative ball). Fred Osmond, who had received the silver pipe in 1904 for service to the Birkenhead club, played solidly for Birkdale in the 1920s and 30s. As for the Chelsea workers – they had a team of their own in the 1920s and beyond, continuing the cricketing tradition with lunchtime matches beside the dam. It seems that it fell to the Birkdale and Northcote Clubs to provide opportunities for keen cricket players to keep playing the game.