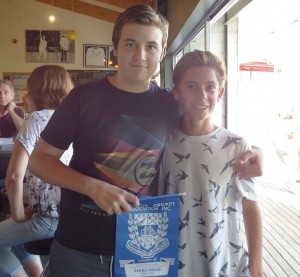 Alex Divall and Oban Hawkins… part of the Year 9/10 T20 side that won their Auckland grade.

Most cricketers head off to play for their school teams from Year 8 but to keep them involved with Birkenhead City Cricket Club we encourage them to join a Year 9/10 side – either for a short T20 competition that starts before school cricket does, or if they aren’t playing competitive cricket at their school, we set up a Year 9/10 afternoon cricket side that can be entered at an appropriate level in the Auckland club cricket competition.

With four from five wins, the team won their grade.