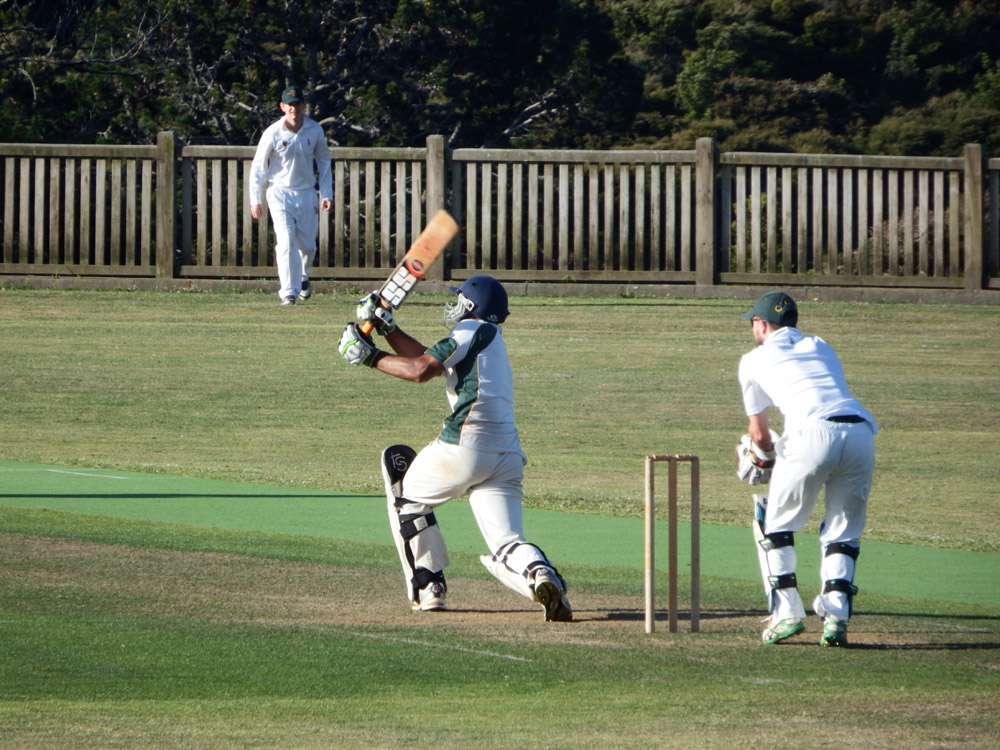 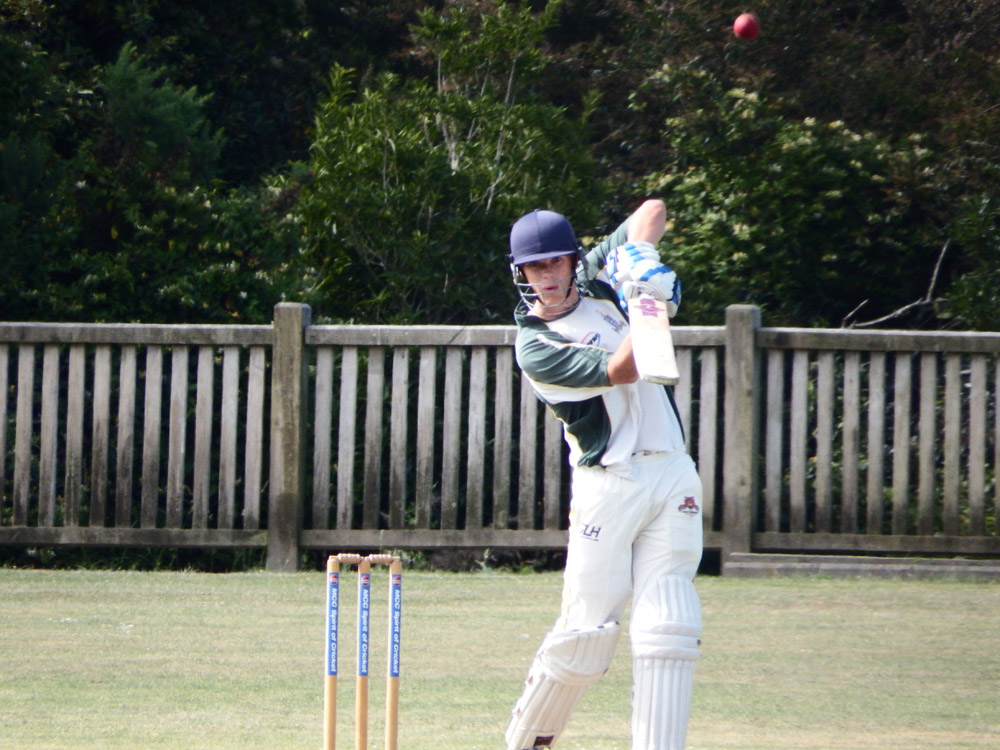 Ullrich pops one up. 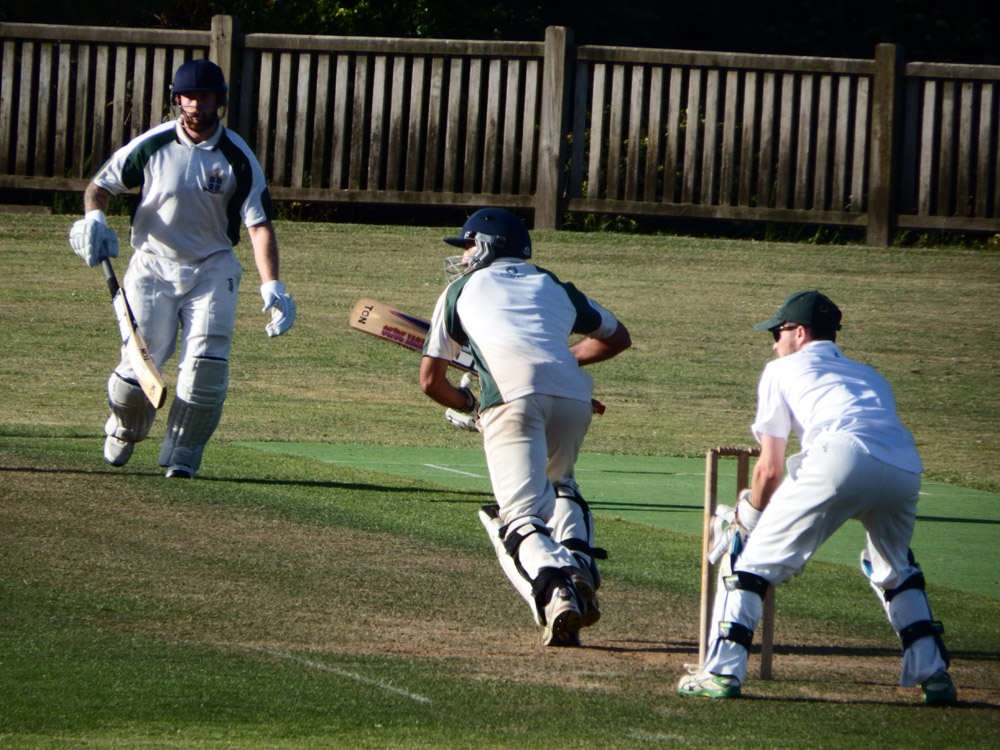 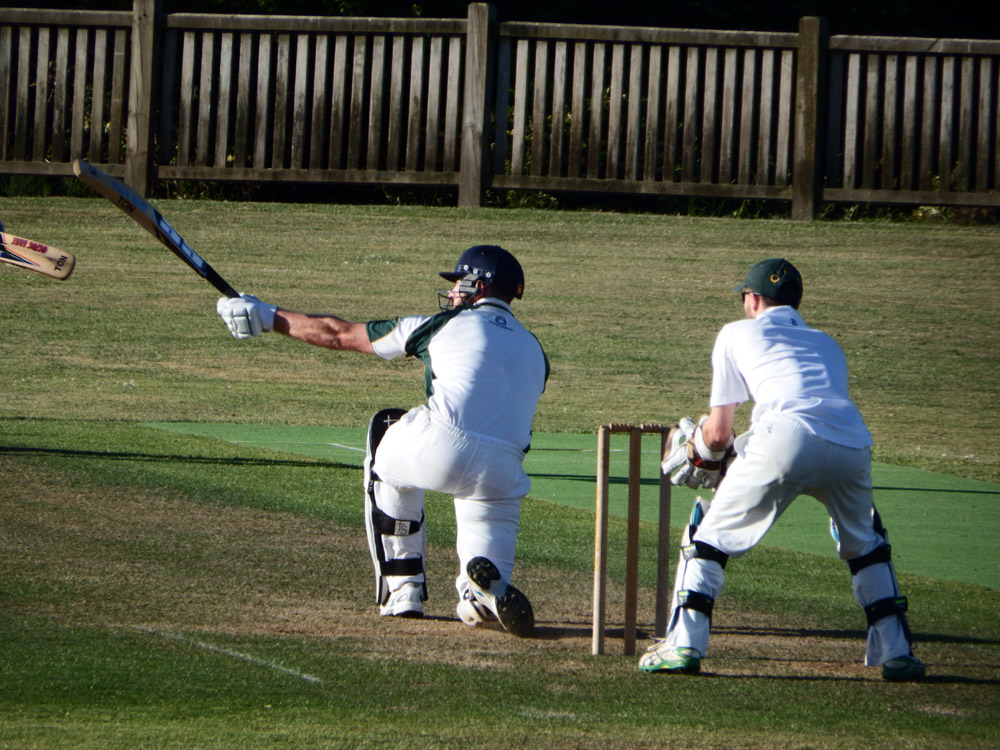 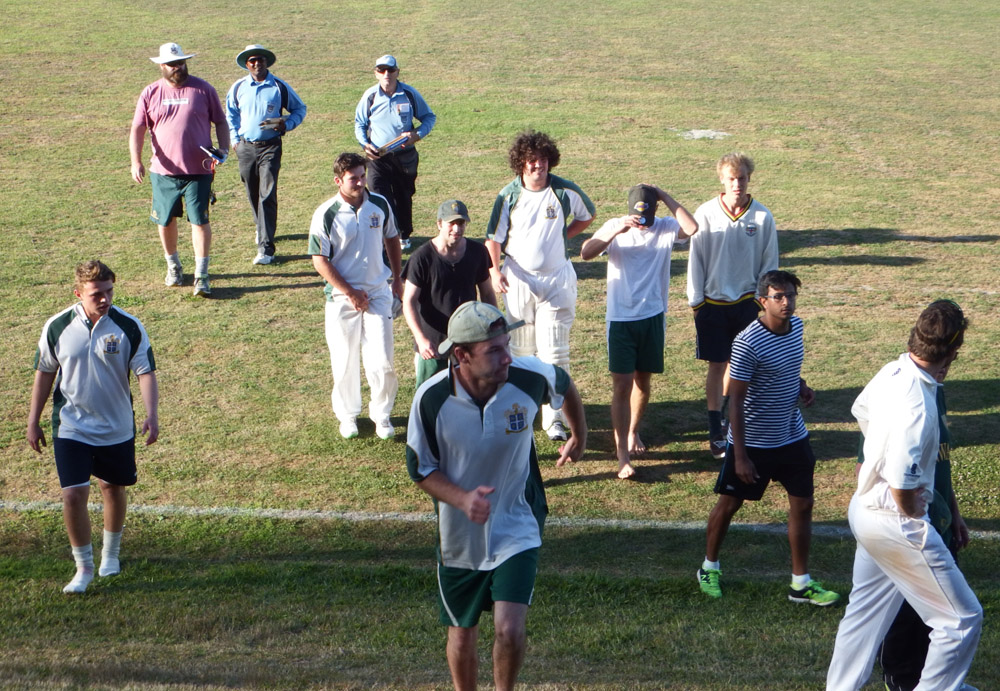 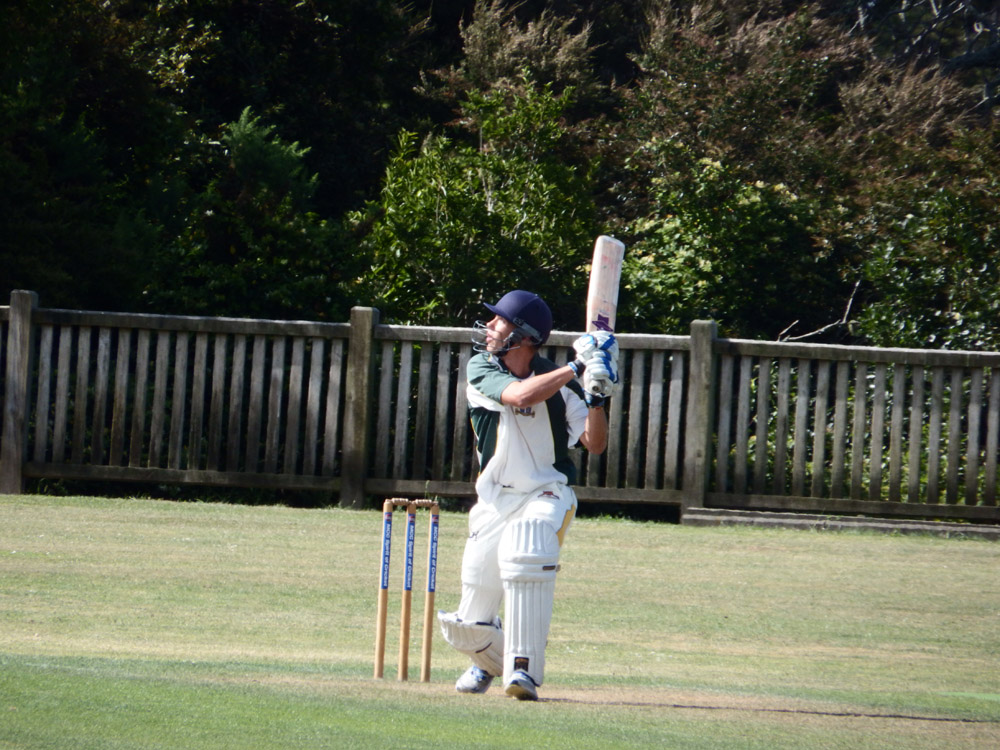 Take that from Ullrich. 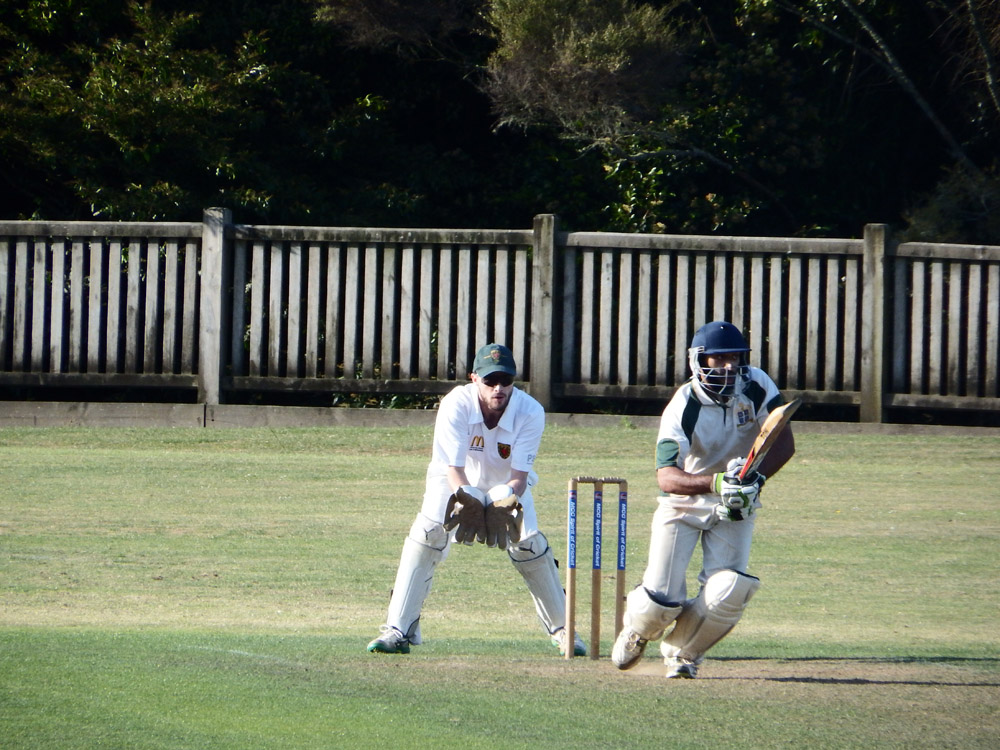 High fives all round after an outright victory over Cornwall 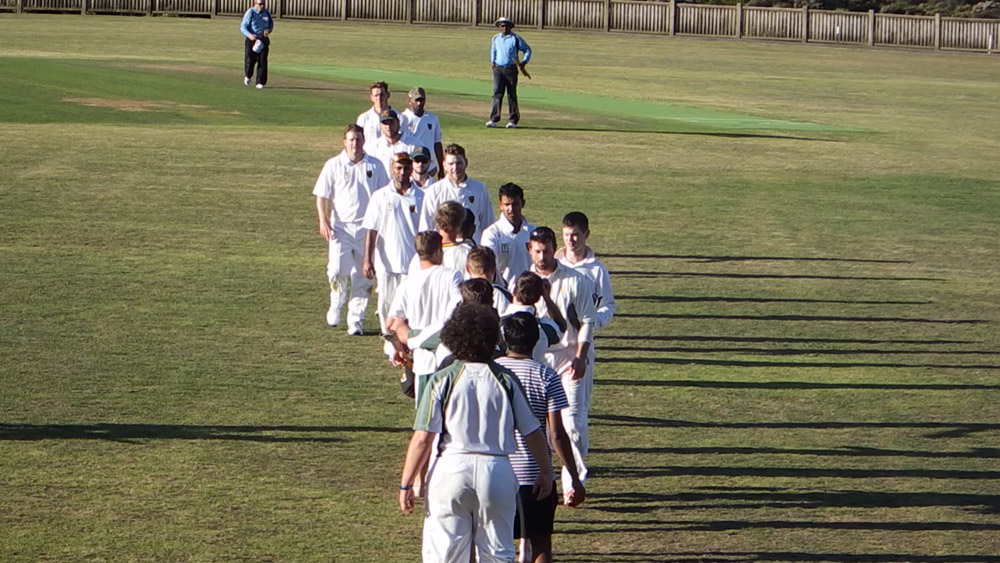 Dylan was always confident. He smashed his 46 off 25 then left the boys to do the job. 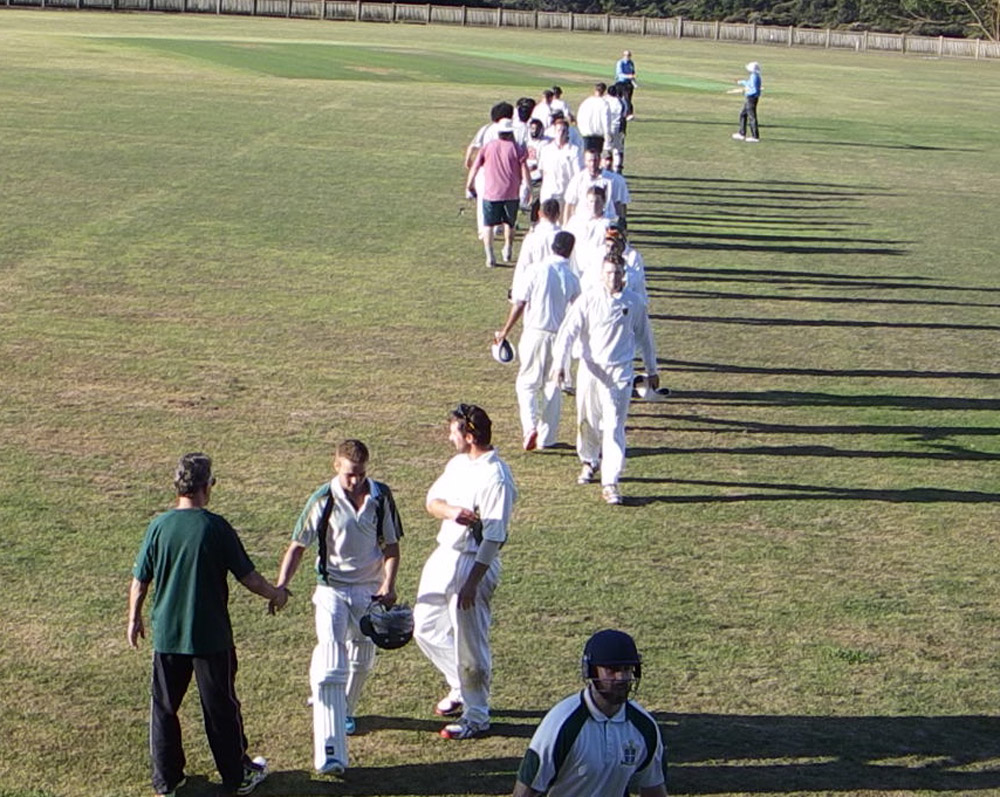 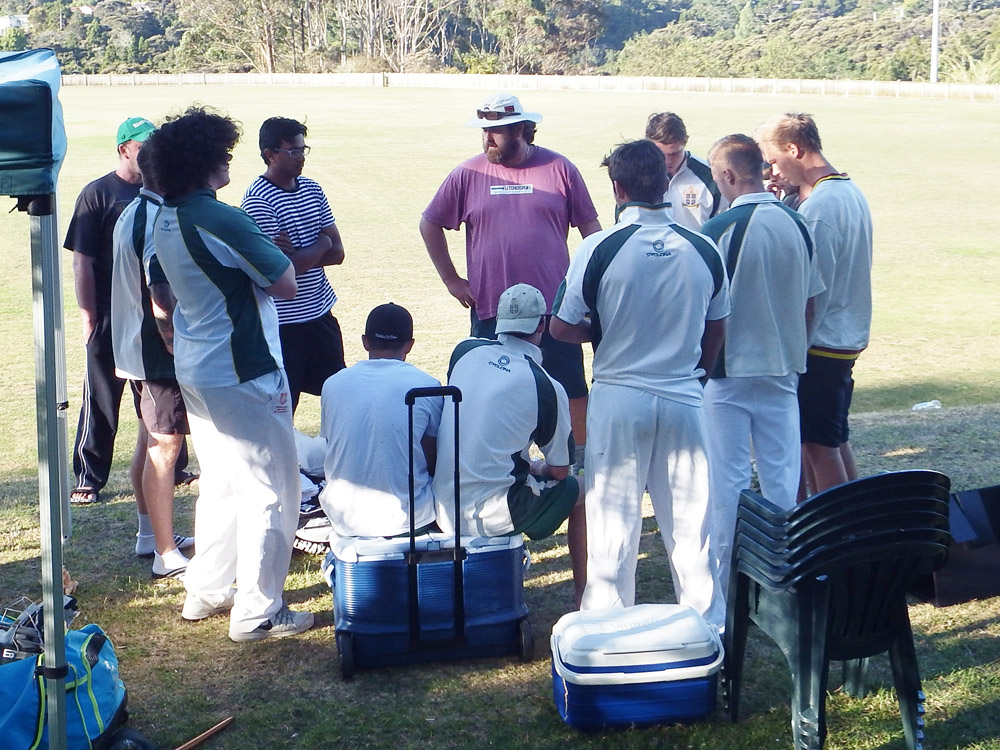 The last ever team chat with Fletch. Thanks for everything. "You've got the talent, it's about attitude now. Let's hope this win is the start of something."

Well it was a long time between drinks but Christmas came early in the week of Dec 14-20 for the BCCC Premier Men’s side – it brought their first two victories of the season.

Wednesday was the first of them, when BCCC took on Hibiscus Coast in the T20 competition. The toss was won by Hib Coast who decided to have a bat but failed to fire and were all out for 81 in 15.2 overs. Ullrich Boshoff was the pick of the bowlers with 4/33 off 3.2 with Tony Treadaway bowling 2 overs, 2 for 3, and Nic Montgomery 4 overs, 2/14. Praneel Hira picked up the other wicket with 3 overs 1/11.

Video: Ullrich goes boom in the T20 against Hibiscus Coast

VERSUS CORNWALL – TWO DAY GAME
Whether the winning feeling rubbed off on the team from the T20, or they decided to send coach Neil Fletcher off in style (he is relocating to Wellington and won’t be with us for the second half of the season), something sparked a remarkable fightback on day two of the Prems’ two-dayer in the Hedley Howarth Trophy competition, against Cornwall.

Cornwall had batted first and fancied their chances after they put on 301/8 and declared.  Their instincts were correct and at stumps on day one BCCC were 50/3. On day two, Birkenhead were tumbled out for 148 on a flat pitch, with the only resistance coming from Jaycob Curtling (50) and Ullrich Boshoff (32),

At this point Cornwall chose not to make us follow on and batted again and, for whatever reason, confidence or perhaps not counting the overs correctly, they declared on 89/5 giving them a lead of 242. But there were 40 overs left in the day for BCCC to get the runs and anyone who has seen Dylan Steyn open the batting would know he doesn’t mess around in such situations. The intent was clear from the get-go as he blasted 46 runs from 25 balls, well supported by Ethan Lovich 34 (35).

Video: Rudi receives applause after his great innings of 51.

Ullrich Boshoff, 32, was looking good before being caught. When Praneel Hira (20) was caught and bowled later, it took us to 174/6 and, while confident, we needed someone to provide the backbone of the innings. A 103-minute stay at the crease and captain’s knock (51) from No 6 Rudi Botadra made the difference and brought us ever closer to the total.

Still, when he fell, the spectators did start to get a bit edgy. But looking safe as non-leaky houses was No 8 Tony Treadaway. A blip came when Adam Baard was run out without facing a ball meaning we had just two wickets left to inch towards the required total. (A few hearts may have stopped at that point.)

In the end it built to the final over and the equation was two runs required and 6 balls to do it. Treadaway wasn’t mucking around though and boomed a massive 6 to give BCCC a reverse-outright victory, after their first innings loss, against the much-fancied Cornwall side (currently the NZ one-day champion club side). Treadaway’s innings of 45 cane from just 43 balls, and was a fine knock under pressure. It was a pleasure to see Fletch shake Cornwall coach Rex Smith’s hand and to be sent off on the back of two wins in a week. Thanks Fletch!

Video: Tony Treadaway booms the winning 6 to take BCCCC to victory in the final over of the day.

In other good senior cricket news the B3s, a team known rather fruitily as the Apricots, won on first innings against Eden Roskill on December 19. ER batted first scoring 242 at Onepoto Domain, with Jamie Taylor having the excellent figures of 3/24 off 14 (5 maidens), and Javeed Ali chiming in with 3/49 off 11.

Matt Kingsford of the B3 Apricots (not the B1 or B2 bananas) scored 87.

In reply the Birkenhead scorecard was looking shakey at 55/4 before wicketkeeper Matt Kingsford showed his class scoring 87, well backed up by No 6 Jamie Taylor (51) and No 7 Kyle Williamson who was not out on 37 when the Apricots (no, we don’t really know why…) reached 243/8 declared. Well done boys.