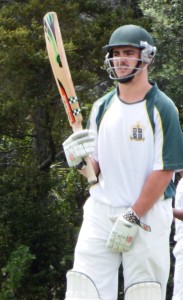 The Senior A1s, last year’s Premier Reserves, continue on their winning ways and goal to regain Premier Reserve status next season. Already well in front on the two-day table, the team recorded an important victory on the weekend to be there or there abouts on the one-day table (other sides haven’t filed their results yet.)

On a stifling hot Auckland day at Te Atatu, the team turned up to be met by grass that would have made some sheep very happy.

Captain Jono Whorwood said “The pitch hadn’t been mowed for at least a month; blades of grass reached as long as a middle finger, which I suspect the groundsman thought of when he was phoned to mow it because he didn’t turn up.”

The senior As lost the toss and were put into bat. “We started well with Rob and Ethan,” says Jono. “But the stand-out had to be Nic [Montgomery] not caring about line and length, just trying to put everything over the cover boundary – to be fair, most didn’t come off.”

“Luke had a bit of fun out there and Manny [Manuel Seidel] tried to hold the tail together but no one could stay with him, so we finished all out for 201, which wasn’t bad considering the pitch.”

Manny finished not out on 24 batting at 7 as the tail failed to wag and the side was bowled out in 40.4 overs.

“Don’t worry though, because after some consultation I stepped up to bowl some slow-medium, bang! Wicket!  After this we then kept our foot on the throat and won by 45 runs, with 3 wickets apiece to Manny and Nic.  Vish [Abrol] finished the tail and Arsh [Singh] also picked up a wicket.”

Keep up the winning boys!

Next week’s game is versus Cornwall at home.