Thumper – geek in real life, wizard with the ball.

One of two one-day social teams that’s been around the club a long time is the one-day 4C side. It’s their 16th season with the club and although the word social is the official description of the team they’re a competitive bunch.

Club chairman Andrew Gale, one of the club’s longest-serving members, plays in this side, as well as his organisational duties for the club.

On November 29 the team took on Navy at Ngataringa who put on 218/10 batting first.

The final wicket of their innings was taken by Craig “Thumper” Dyason and it was his 7th for the match. He ended up with 7/32 off 8 which is the second-best bowling performance ever for the 4Cs behind the 8/24 taken by Brian Russell many years ago.

In response the 4Cs fell short at 186 a/o, despite the efforts of a young man named Sai Karnan, who showed the benefits of having new blood coming into the team.

Other bowling efforts of note recently include one on November 15, when Sathish Kumar picked up a 5-fer, with 5/33 off 5.4.

As at November 29 the 4Cs had won two, lost three and will be looking to even up the ledger on December 6 when they take on Grafton at Shepherd’s Park at 12.30pm. 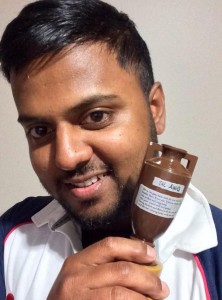 Sathish with his 5-wicket bag trophy.