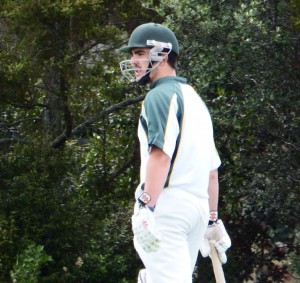 The Senior As have scored back-to-back outright victories, with their innings and 72 runs demolition of Cornwall on December 6/7.

The win follows their outright last week against Waitakere.

BCCC won the toss and chose to bowl first on a wicket that nipped around a bit early, to BCCC’s advantage. Arshdeep Singh (2/24 off 7) opened the bowling with new club acquisition Michael Coetzer (2/10 off 7) and it wasn’t long before the pair’s tight bowling earned them two wickets each and Cornwall was reeling at 22/4, the top four gone.

After lunch, the track became a spinner’s paradise and Manuel Seidel rammed home BCCC’s advantage with a great spell of leg-spin bowling – ending up with 4/15 off his 10 overs which included seven maidens.

Harshil Pandya (2/26 off 7.4) added to the home team’s pain finishing off their innings, and leaving BCCC with just 91 to pass to get first innings.

Rob McConnochie (playing on day one for this side, and the Prems the next day) was showing patience before being caught for 15 and the loss of two quick wickets after that saw BCCC at 32/3.
But that was when the match turned with a 186-run partnership between captain Jono Whorwood batting at 5, and No 4 Nic Montgomery.

Nic brought up the team’s first century of the season with 112 off 103 balls (19×4, 2×6). Jono says Nic played well and “waited for the right ball to put away and made it count by hitting the gaps in the field”. Jono himself looked solid and on track to his century, but fell just short, ending up with 91 runs off 82 deliveries (18×4, 1 x 6). Nic says of his captain it was a “measured, well thought-out and composed innings. He waited to hit the gaps while we were still chasing first innings points, but became belligerent as the innings progressed, striking powerfully down the ground on a number of occasions, putting the bowler, the umpire and his partner in danger!” For much of their partnership the pair were travelling at six an over.

Of note also was the fact there were no extras conceded at all in Birkenhead’s  first bowling innings, and 10 all-up in our second (70.3 overs).

Club stalwart and long-time player Manuel Seidel, who played a key part in the victory, describes the win as “the most comprehensive all-round team performance I have been involved in for many years – maybe even ever.” 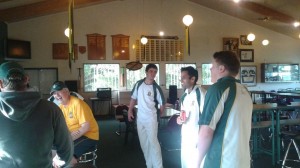 Nic Montgomery back at the club after the game. Paul Rainey is obviously very happy! 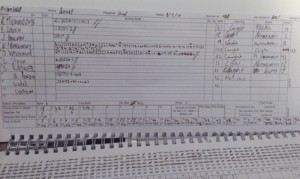