The Birkenhead City Cricket Premier side has made the top four in the Hedley Howarth two-day trophy – a great achievement for a team that is rarely tipped as one to beat in the Auckland Premier competition.

The team’s next two matches will be at home – against Auckland University on February 21/Sunday March 1, and against Parnell on March 8 and 15th before heading to Onewa Domain for the final Major Championsip match against Takapuna on March 21 and 28th. 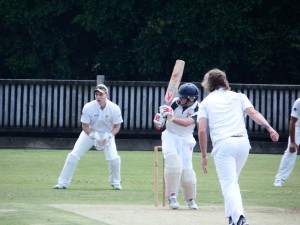 “Yeah, the fuel bill will be a bit lower over the next six weeks,” coach Neil Fletcher says, alluding to the fact all games are this side of the bridge from hereon in.

But that of course is not the important part. It’s being in this position in the first place.

“Top four was always the goal, because then you have the chance of a crack at some silverware, as well as taking yourself out of the relegation zone,” Fletcher says. “I guess most people would have seeded us in the bottom couple of teams as the start of the season, but I felt we could go in as unknowns and maybe trip up some teams.”

The first inkling that that could happen came in the outright win against East Coast Bays in the very first round of the season, a moment Fletcher says has been the highlight thus far.

“That gave us some real self belief as we dominated the match against one of the more fancied sides,” he says.

The team has seen newcomers added to the side after the departure of player/coach Tauseef Satti this season, and the retirement of players such as Phil Treanor. Fletcher says the acquistions have all brought something to the side, and that Rob Evans has been an effective strike bowler pairing with Rudi Botadra. Both players sit in the top 10 wicket takers for the two-dayers so far this season.

“Rob Evans, as a strike bowler, has probably been our biggest impact this season, having a bowler that can knock over opposition top order batsmen. 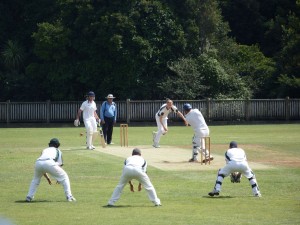 Rob Evans has been an efficient strike bowling acquisition.

“Aaron Jeavons, Akash Christian and Mark Tulloch have all brought some much-needed experience to an otherwise young squad, so I think we have a good balance with youth and experience now,” Fletcher says.

One of those young players is opening batsman Dylan Steyn, 19, who recently got his first shot at playing for Auckland A.

“Dylan has really impressed … how he bounced back from a slow start to the season to score six consecutive 50s, and earn selection for Auckland A. It says a lot about his character, and he was willing to refine his technique.”

Another young player who helped the team out of a difficult spot was batsman Jaycob Curtling. Regular wicket keeper Allan Plant departed for Tauranga early in the season, for his work as a doctor, meaning a glove man was required.

“Jaycob Curtling stood in for a while and did a good job,” Fletcher says.

But since Christmas, new recruit Fraser Allan has moved from Counties-Manukau and proved his worth from game one. “He has been absolutely outstanding. He is an excellent keeper, and gritty batsman and has contributed so much on the field,” Fletcher says.

Fletcher is hoping for consistency over the next three two-day games, which prior to Christmas, in the one-dayers, was up and down.

“Getting rolled by North Shore on an artificial pitch, and losing our captain Mark Tulloch with a broken finger on the same day was a lowlight,” he says. ” But since then, even the games we lost I thought we fought really hard, so there have been some good signs.”

Not a lot will change in the team’s approach for the upcoming championship games, and at this point the side is injury-free.

“I think it’s important to have experience within the squad to remind the young players to keep it simple, and play one session at a time. We need to keep playing hard cricket, trying to win one session at a time and set the game up. First innings is always key, going into day two in a strong position.”

Looking at the three opposition sides the team will face, Fletcher says they all have their strengths.

“I think Uni and Parnell are predominantly stronger in the bowling department, while Takapuna are more reliant on their batting power and spin bowlers. I think Parnell have shown they are the form side and probably have the best balance.,” he says.

Auckland selection could play a part with some of those teams. 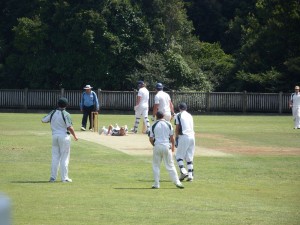 Rob Evans put his body on the line against Parnell.

Equally important over the next few weeks is the performance of the club’s Senior A1 side. It is the first season the club has not had a premier reserve side and it’s not an ideal situation so it’s important they perform strongly from hereon in.

That side takes on Takapuna at Shepherd’s Park in a two-dayer this weekend, then Hibiscus Coast, then Auckland University.  All sides sit very close at the top of the table.

“They are just behind the leaders, and it’s important for us to win this grade to gain promotion,” says Fletcher. “Player unavailability has really hurt us recently, and we need them to perform in these last three games.”

Get down and support the boys this weekend: Prems kick off at 11am at home.
Senior A1s play at midday at Shepherd’s Park. 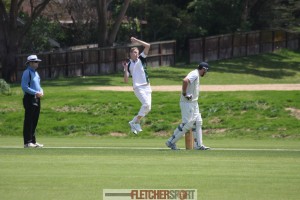 Rob Evans bowling in the match against ECB early in the season, in which BCCC took the outright. 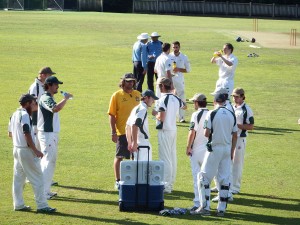 Drinks for a side mixing youth and experience.