Midget cricket back in action January 31

UPDATE: 7.15AM ALL MIDGET AND JUNIOR CRICKET CANCELLED DUE TO RAIN JANUARY 31.

School’s back and the good part about that, is that cricket is back too!

Starting January 31 the fields will pack out again with enthusiastic young cricketers learning their skills. As you know, games are played at Birkenhead War Memorial and against Kumeu at Huapei Domain.

The draw will take a break for Waitangi Day and return the following week.

As well, the games that were due to be played on February 21 will be played on Friday February 20. The reason? We’ll be having a World Cup club night that Friday with the Black Caps versus England game on the TV. Pencil it in!

The bar and the BBQ will be open and there’ll be entertainment for the kids. More details about that as they come to hand, but in the meantime we look forward to seeing all the kids on the park Saturday January 31 for the second half of the season.

Here’s the draw for the rest of the season. 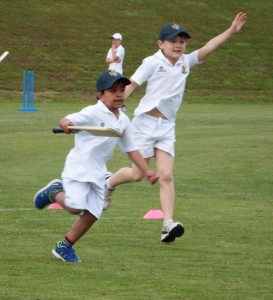 The BCCC midgets are back in action.