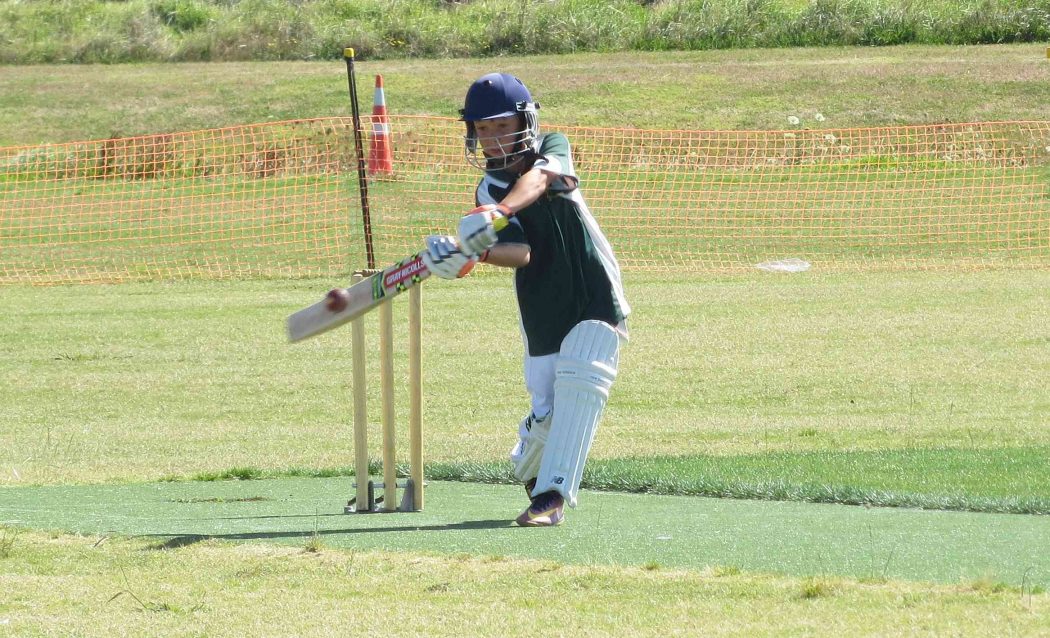 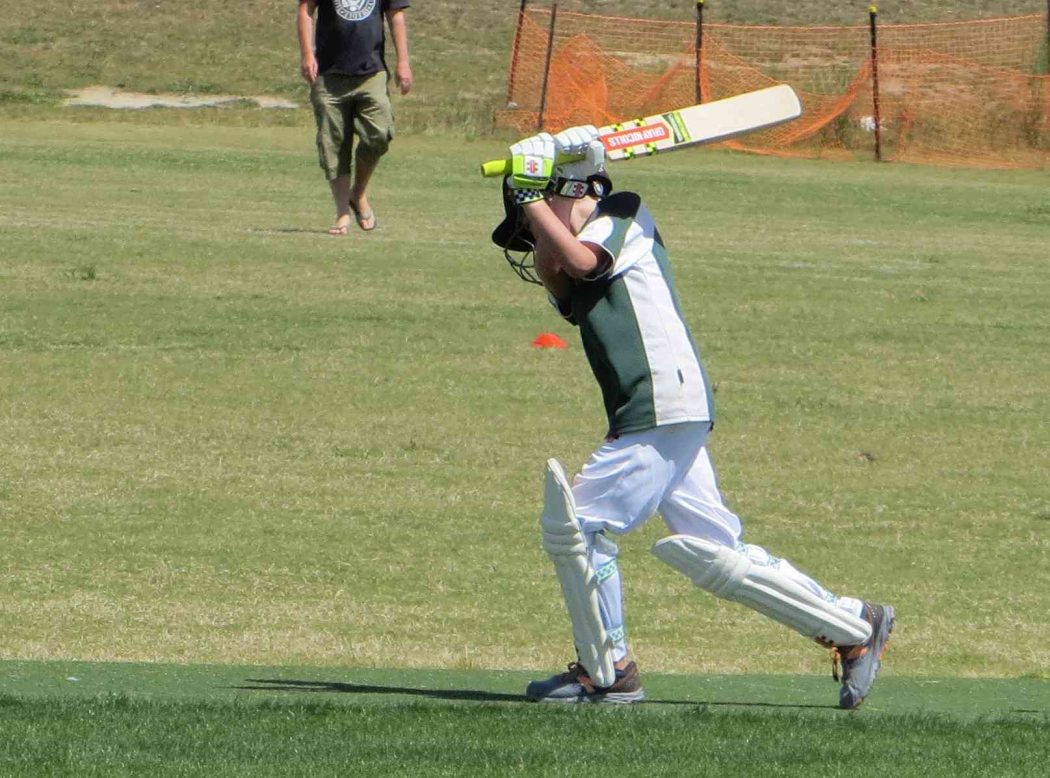 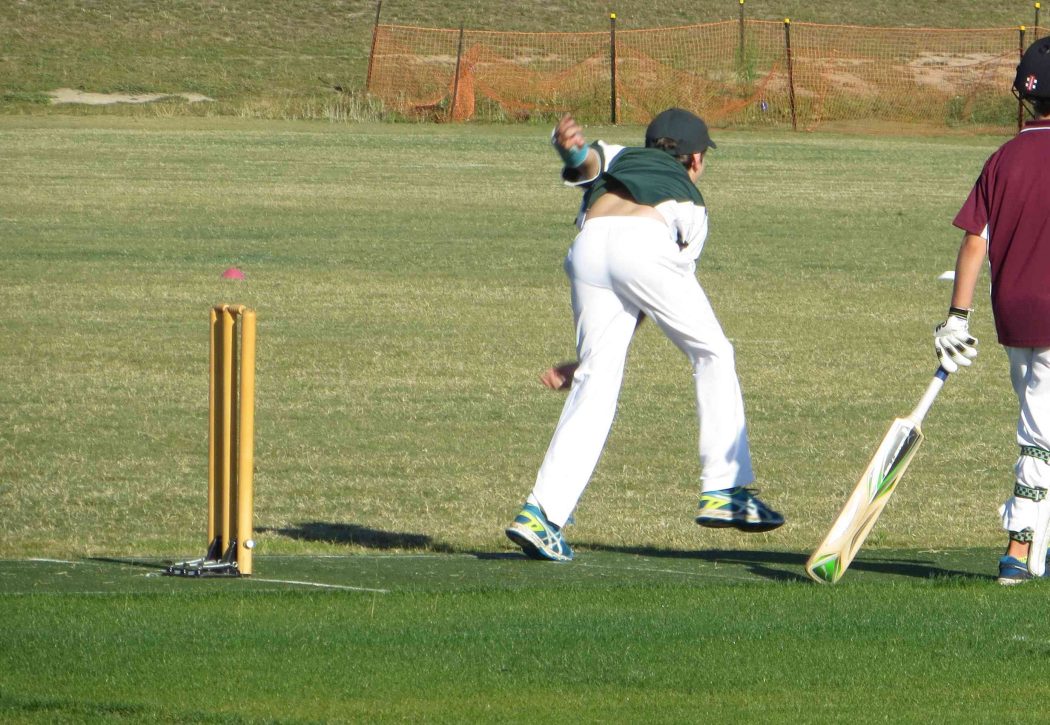 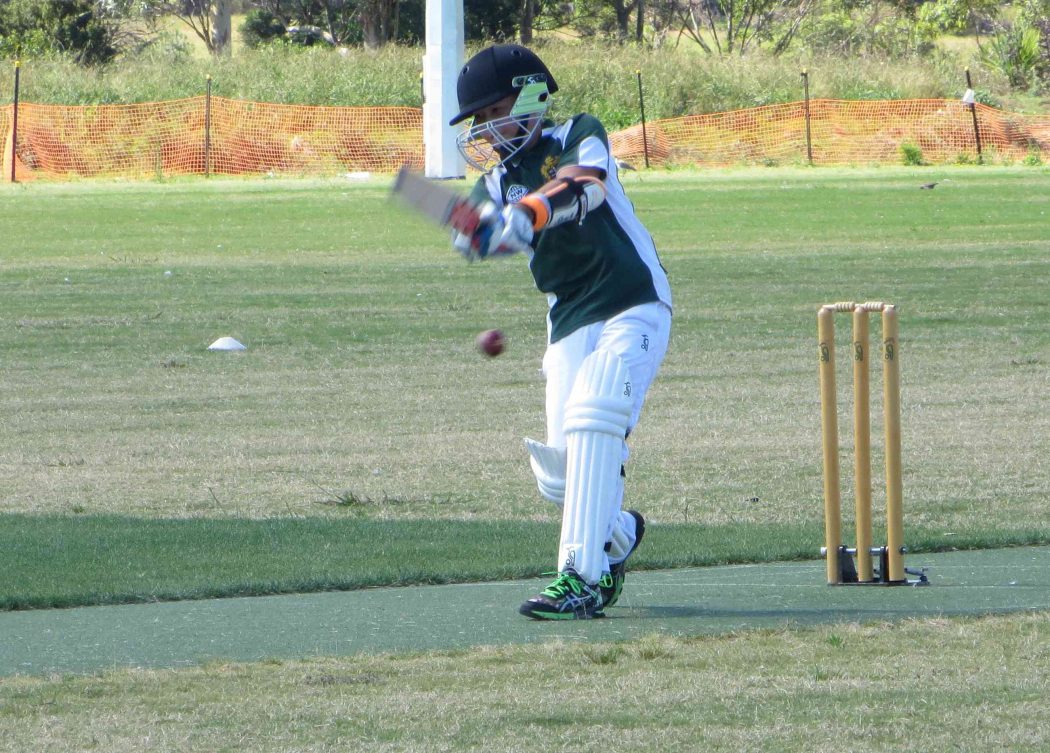 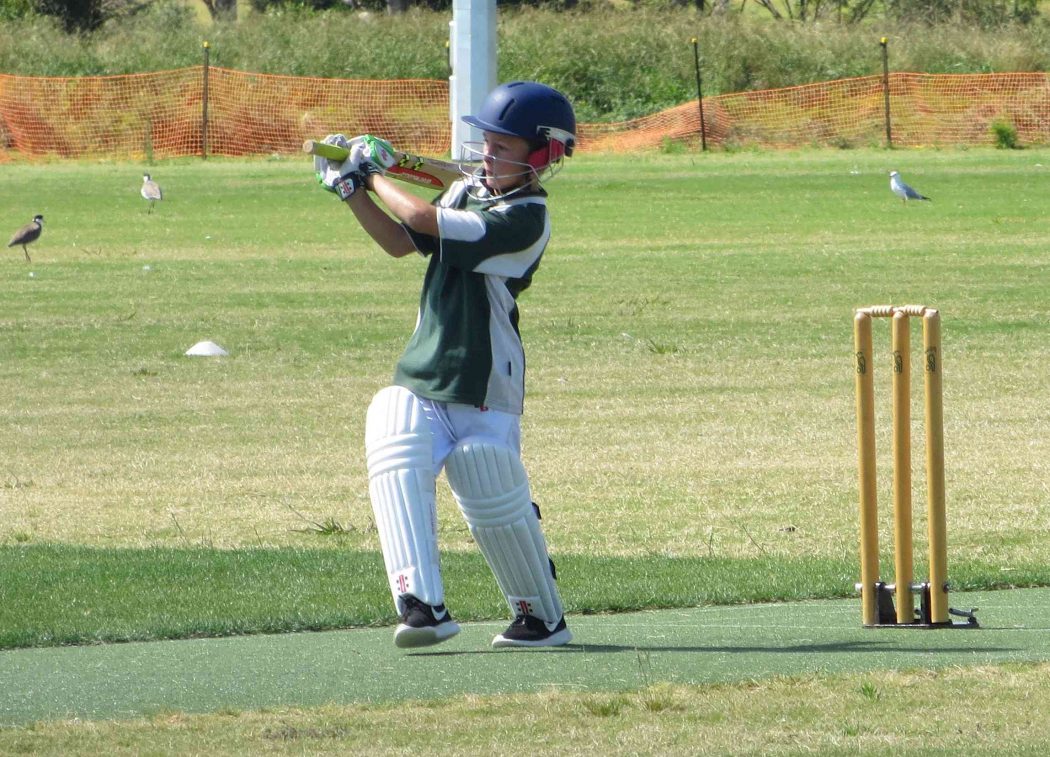 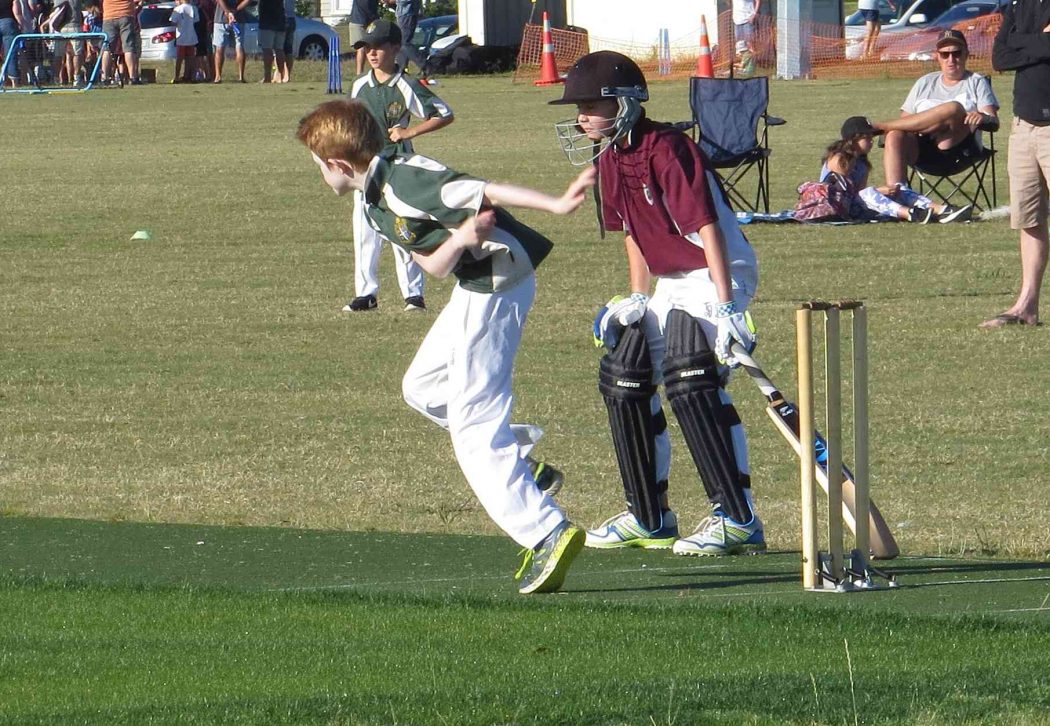 Liam of the Cobras 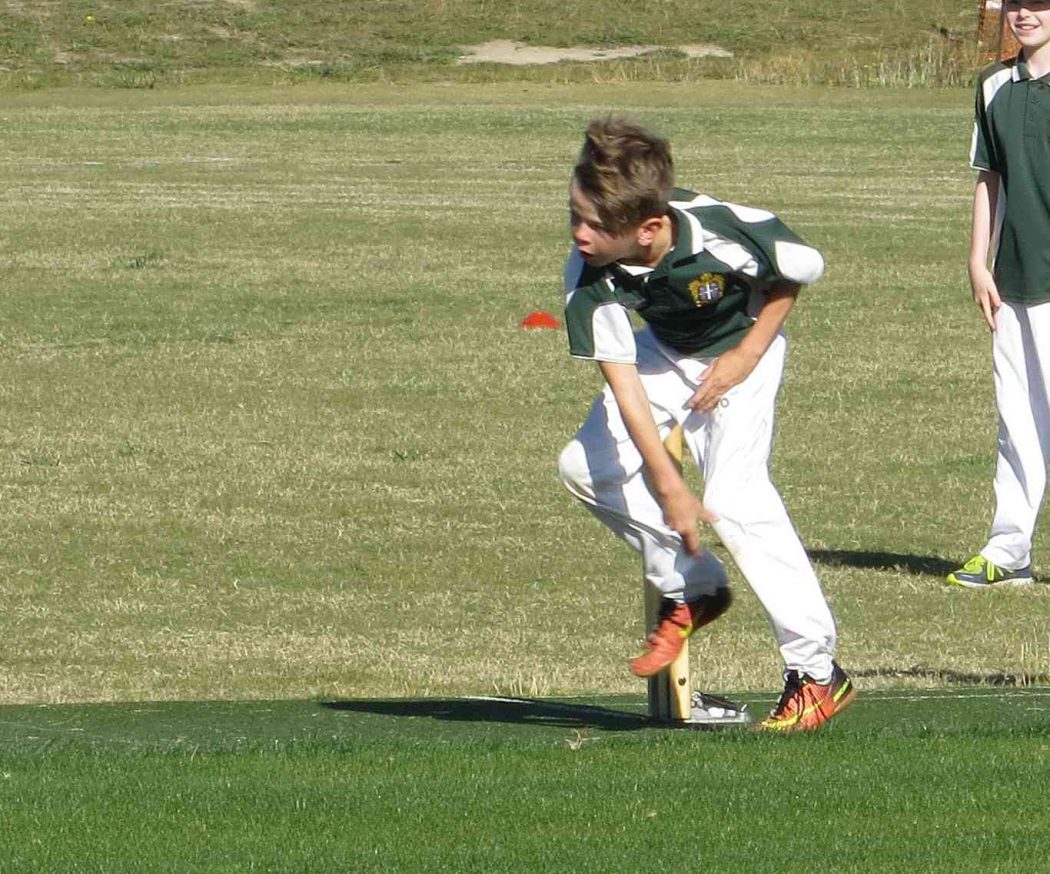 Olly of the Cobras 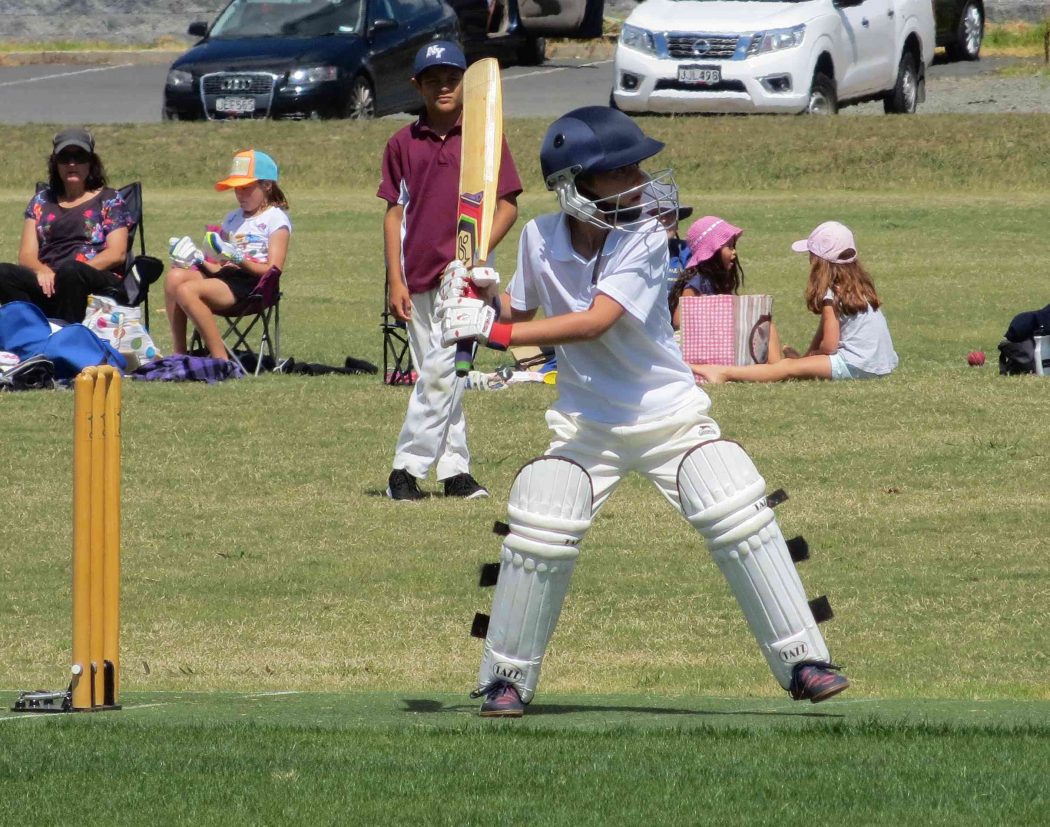 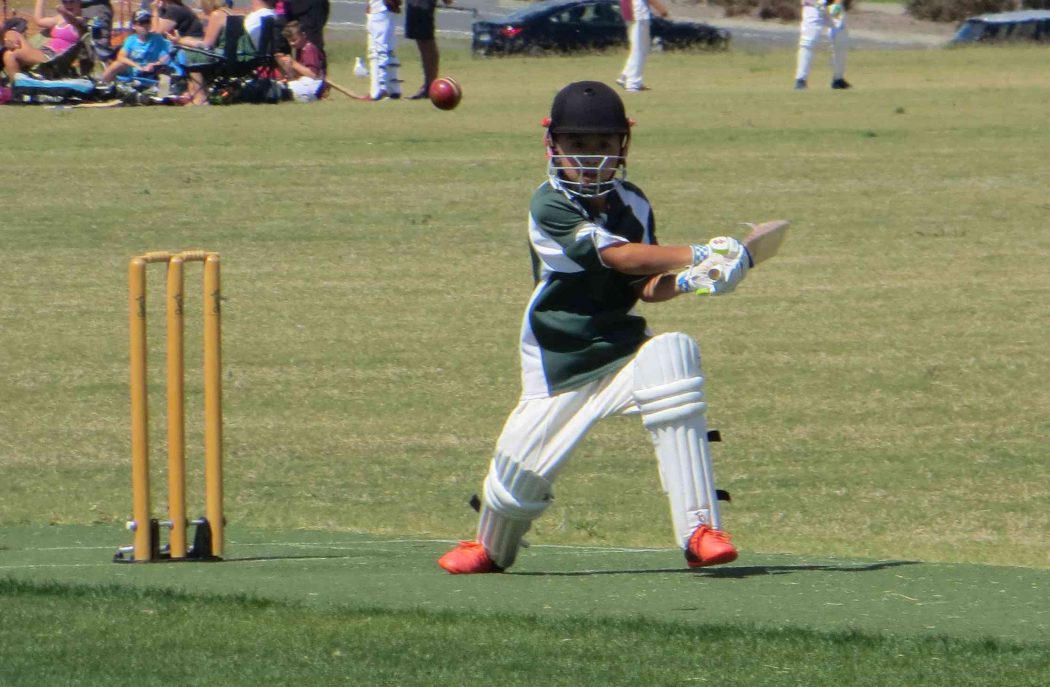 Junior cricket is well under way for the second half of the season and the cricketers are coming along really well with some great performances and huge improvements being seen. Here are a few match reports from the past few weeks. If your team’s isn’t there, have a chat to your manager and coach or write it yourself and email it to denisemontgomery.cricket@gmail.com

February 4: Game 9 for the Cobras was a “top of the table clash” against North Shore CC Urban Kids Furniture at home. After his fantastic performance in the last game (scoring 54 runs), Alfie was the captain for this game. NSCC won the toss and elected to bowl first.

Ryan C and Liam had the tough job of facing the NSCC opening bowlers on a pitch that had a variable bounce, but did a great job scoring 13 runs. Next in were Alfie and Ben – really good communication and running, kept the score ticking over, with Alfie (36) hitting five boundaries including two big sixes to help the partnership to finish on 49 runs. A huge thank you to Ricco (22), who filled in for this game and was playing his first game of hard ball cricket – he teamed up with Joe for the third partnership to score a combined total of 44 runs including three boundaries to Ricco and one to Joe.

Olly and Ryan S were the last two batsmen in, and after some quick advice from coach Aaron, they combined some big hitting with great running to score 54 runs including three boundaries to Ryan (21). The Cobras finished their innings on 160 runs for the loss of 7 wickets giving a net run total of 125 runs.

NSCC were out to keep their No 1 position and batted very well against the Cobras’ bowling attack. Consistently good bowling by all the team resulted in Liam, Brodie and Joe each getting a wicket, with Liam in particular always troubling the batsmen with his outswingers.

The Cobras had possibly their best game in the field – great backing up combined with very good communication … letting the fielder know which end to throw to, resulted in very few overthrows. Pressure from the tight fielding also created five runouts including direct hits from Brodie and then Ben with the last ball of the innings to put a full stop on the game.

NSCC finished on 140 runs for the loss of 8 wickets giving a net run total of 100 runs.

Well done to Brodie who got Player of the Day – he has worked very hard on his bowling and it has really paid off… even with a broken wrist!

And well done to the mighty Cobras … a great win to take them to the top of the table!

February 11: The Birkenhead Cobras travelled to Metro Park to play against the Hibiscus Coast Jaguars, who won the toss and elected to bat first.

Captain for the day Brodie opened the bowling with Liam and immediately had the batsmen struggling to score runs. Joe and Alfie kept the pressure on the Jaguars, with each getting a wicket a-piece.  Cameron had the opposition bamboozled with his spin bowling and managed to snare a wicket, while Olly did a fantastic job to get three wickets at the other end.

Ben and Ryan C kept up the attack and were both rewarded with two wickets each. Ryan S also bowled very well to restrict the run scoring. Again, the Cobras showed plenty of commitment and energy in the field and were rewarded with four run outs – one each to Ryan C and Cameron, and two to Olly. The boys also took two great catches – one by Ben deep in the field and the other, a caught behind by wicketkeeper Joe.

With Brodie still unable to bat with his broken wrist, it was Alfie and Liam opened the batting. They scored 40 runs for their partnership including three boundaries to Alfie (23) and one to Liam.

Cameron and Joe were in next and they continued to pile on the runs. Cameron in particular had a great day with the bat – hitting six boundaries which included two sixes for 42 runs.

Ryan C teamed up with Ryan S (to help confuse the scorers) and they too did a good job of keeping the scoring ticking over. Three boundaries to Ryan S (24) helped their partnership to finish on 43 runs. The final pairing of Olly and Ben were in next. Olly was very excited to hit his first boundary and another two to Ben, helped them finish on 31 runs.

The Birkenhead Cobras finished on a total of 175 runs for the loss of 8 wickets, giving a net run total of 135 runs and the win.

Congratulations to Joe who got Player of the Day – he batted very well to get a not out, got a wicket with his first ball and did a great job behind the stumps including a smart caught behind.

February 18: Another day, another victory, this time against NS Village Chiropractics.

Joe was captain for this game and started well by winning the toss and electing to bowl. It was to be an interesting match-up with the teams featuring the top two ranked batsmen in the league.

The Cobras had one of their best games with the ball – giving away very few wides or no balls. Their tight bowling was rewarded with Liam, Cameron and Alfie each getting a wicket, Ricco getting two wickets and Ben getting three. The boys also fielded very well, lots of talking and encouragement … a real team effort! This kept the pressure on the opposition batsmen and resulted in four run-outs (two to Ryan S) and two catches.

Scoring was always going to be difficult due to the long grass, a very slow outfield and all the rain. A lot of great shots came up just short of the boundary. Cameron and Ryan S got us off to a flying start, with Cameron hitting three boundaries in a partnership of 42 runs. Captain Joe teamed up with Liam and they did a great job of rotating the strike. Their partnership ended up on 28 runs and included a boundary from Joe.

Next in were Alfie and Ricco – excellent communication between these two batsmen and a combination of power hitting and deft placement allowed them to a combined 34 runs.

The final pair in to bat was Ben and Brodie. Again, very clear calling and good running from these two finished with a partnership of 34 runs, including two boundaries from Ben.

The Birkenhead Cobras finished on 138/5 to give a net total of 113 runs and another great team result. (NSCCVC scored 104 runs for the loss of 12 wickets giving a net run total of 44 runs.)

Congratulations to Ben – his three wickets, a great run-out from a direct hit, combined with a not-out meant he was awarded Player of the Day. His three wickets also moved him up to sixth in the league for wickets taken (15).

February 11: Good game on Saturday and special thanks to the three BCCC dads who stepped up and did all the umpiring since the other team wasn’t willing to supply anyone. Special mention to Jon who was an awesome coach for the day – if you are around next year, there may be a new calling for you!

Player of the day was Blake who was a great fielder and also scored the his most runs this season with 22.

February 18: The dampness of the grass on Saturday and the fact they didn’t seem to be have used a catcher on the mower meant we had few runs this week, but a great home game anyway.

Another brilliant day for Blake, this time for bowling with 4/12 off four! Blake was also the highest run scorer today with 17.

Charlie was the player of the day but at the end of the day it was a loss.

FEBRUARY 4: A great start to 2017 from the boys.  We played East Coast Bays and won the toss, electing to bat.

Sam and JT gave us a solid start, only for JT to get out to an unlucky call.  Sam made a quick 25.  We had a mini-collapse with 6 wickets falling quickly.  Shivam came in and blasted a quick 35 to get us back on track.  He retired but returned to the crease as we lost all wickets and ended up on a great 58 not out.

We only had nine players and Tiger Watson made the most of this second life with 30 not out on his second stint at the crease.  We made 200 which was a great score.

Our bowling was great again.  Sam Kay led the way with 3 wickets with useful support from Krish and James Taylor with 2 each.   Good fielding was displayed too including some wonderful catches.

After 9 rounds, we sat firmly at 3rd spot which is a great effort from the boys, some of whom are having their first  season of cricket.

FEBRUARY 18: This was our last round-robin game of the season.  We played Takapuna at Sunnynook and had another convincing win.  We bowled Takapuna out for 101.  Highlight was Aaron Sievert’s 2 wickets and a direct hit for a run-out.  Other wickets were shared.

We chased the total down with Shivam again leading the way with a 32 not out.  There was a slight middle order collapse but the boys brought it home with 6 overs to spare.

As well we have four bowlers in the top 10 – the leading bowler for the grade so far is Sam Kay with 15 wickets, James Taylor is third with 13, Shivam Nair is 5th with 12, Krish Nair is 8th with 10. This goes to show the strength of this bowling unit who work well together as a team.

Our results are all here

Under 14 girls The Dragons

February 11: Girls had to default for their first time ever as having moved up a grade they now need 11 players each week rather than 8 as in the previous grade and they don’t have enough! Our mighty BCCC Dragons side is a great bunch of friendly girls who love their cricket and have so much fun playing together. So if your daughter is keen to join us, please ring Stacey Nicholas on 027 481 6640. Need someone right now!

February 4: In their first game in the higher grade (after being promoted because of winning their Under 12 Grade), the Dragons proved they were all firepower.

Batting first we scored 155 for the loss of no wickets, all players retiring. Brooke Te Wake (20), and Molly Moxley (20) were our top scorers.

Howick Pak Tataurangi responded with 83/4 with Brooke Te Wake dominating with the ball 2/8 off 4 and chiming in with a run out.

This was a convincing win with just 8 players  in the higher grade.

Any other reports or corrections or photos, please send to denisemontgomery.cricket@gmail.com

And don’t forget photos on Thursday!