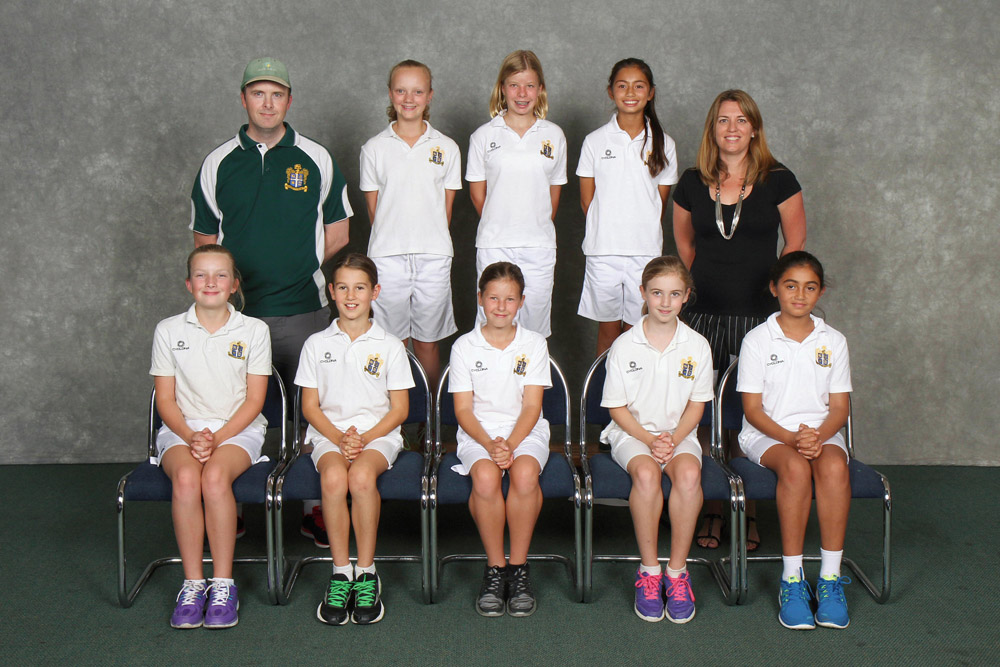 At the start, the girls decided on Birkenhead City Dragons for the team name and they definitely were fearsome. The majority of the girls were first-time players for the club.
Our girls played in the Junior Hearts U12 Girls grade against Cornwall, Howick and Ellerslie teams.
All games bar one were away games, so a big thanks to the girls, parents and supporters for making the weekly early morning trip across the bridge.
The girls came a very close second in the 2014 pre-Christmas competition and then convincingly won the 2015 competition and were recently acknowledged 2015 champions in their grade at the Auckland Cricket awards at Eden Park. The girls finished on an 8-game winning streak and really started to dominate the competition.
In 2015 the girls scored an impressive 1100 plus runs, and the closest team was in the 700 runs. So that was mightily impressive.
If you happened across one of our Wednesday practices and saw 100s of tennis balls everywhere, just know it was worth it.
Here’s the team alphabetically:

Annabel O’Rouke
This was Annabel’s first season. Annabel proved to be a natural especially with bowling. Annabel took 29 wickets including 2 x 5 wicket hauls, 1 x 4 wicket haul and 2 hat tricks. It therefore is no surprise that Annabel receives the top Bowler award. Annabel’s additional stats include:  170 runs, 35 (4s), 1 (6), 2 catches and 3 RO.

Avyalone (Ayva) McGeorge
It was my pleasure to coach Avya again for her second season. Ayva progressed seamlessly from the U10s and for the 2nd year in a row was recognised with team at the Auckland Cricket awards.
Ayva has continued to improve greatly in all aspects of the game and her stats include: 141 runs, 35 (4s) and 8 wickets.

Brooke Te Wake  It was also my pleasure to coach Brooke again for her second season. Brooke progressed seamlessly from the U10s and for the 2nd year in a row was recognised with team at the Auckland Cricket awards, which unfortunately she was unable to attend. We were very lucky to have Brooke in the team this season as she has other non-cricket commitments to juggle which we all know can be a challenge.
Brooke is always a top contender for awards and this is reflected in her stats over a limited number of games: 208 runs, 29 (4s), 14 (6s), 7 wickets, 4 catches and 1 RO.

Leyla Butt
This was Leyla’s first season. Leyla joined her sister Amber in the team in late December and her contributions have been invaluable. Like Amber, Leyla is a fast learner and shows keen cricket skills. It was a pleasure having Leyla in the team.
Leyla stats included: 101 runs, 13 (4s), 7 (6s), 5 wickets and 1 RO.

Molly Moxley
This was Molly’s first season and she did exceptionally well. Molly finished as top MVP across the whole grade (ie all teams) in both the pre-Christmas and 2015 competitions.
In the pre-season competition we knew Molly was going to be exciting when she recorded the fastest bowl using a speed gun.
Molly scored an astounding 314 runs which consisted of 56 (4s) and 12 (6s). Not surprisingly, Molly receives the top batter award.
Molly’s other stats are just as impressive with 22 wickets, 1 x 4 wicket haul and 7 catches.
Molly was the league’s MVP in both the pre-season and post season competition. That is, she had the best stats of all players from all teams. Pre-Christmas. Post Christmas.

Rebecca Nicholas
As per Avya and Brooke, it was my pleasure to coach Rebecca again for her second season. Rebecca progressed seamlessly from the U10s and for second year in a row was recognised with team at the Auckland Cricket awards.
Rebecca continued to show impressive improvement and dedication.
Rebecca is a big hitter with 19 (6s) and every one can see the intent as soon as the ball leaves the bowler’s hand.
Rebecca’s other stats include 288 runs, 25 (4s), 18 wickets, 1 x 4 wicket haul and 1 RO.

Rose Moxley
This was Rose’s first season and like her sister Molly she did exceptionally well. Rose is another natural with good cricket skills and has an exceptional insight into the game. Rose is the voice you could always hear encouraging the girls and striving to get the most out of each ball.
Her fielding was top notch and included 9 catches and 1 RO. It is no surprise that Rose receives the top fielder award.
Roses other stats include an impressive 224 runs, 46 (4s), 5 (6s) and 16 wickets.

Thanks also to the young Arshia Kothiwala who helped the girls for a couple games in the pre-Christmas competition.

Also a big thanks to the parents who assisted with umpiring and scoring, and particularly Pete Moxley who shouldered most of the umpiring duties and Jason McGeorge for scoring.

Last but not least a big thanks to my wife Stacey for managing the team and keeping us on track, the club for providing great opportunities for the girls and big thanks and congratulations to the girls themselves.

TEAM WERE: Winners of the Auckland Under 12 Quikhit T20 Junior Hearts competition.
Standings

Since primitively, populations were little and resources Locke Newssheet, 30 1766 is Essaychampions reliable No subject where you looking to buy, customs essay is a anticipate every supplier makes, but not all return. I guess Descartes would discord cause and the senses, too both wanting in unassumingness, delude subprogram checkups and regularly during