Two out of three not bad in BCCC Club of Origin

The final was between Birkenhead and North Shore, played on grass at North Shore.

Club of Origin is an annual event designed to keep youth players involved with the club they played their junior cricket in. Most of these players have gone off to high school and play their cricket there and of course we’d love to see them back at the club once they finish at school. Matches are played between North Shore, Takapuna, Kumeu, ECB, Hibiscus Coast and Birkenhead. Each team usually plays three matches. 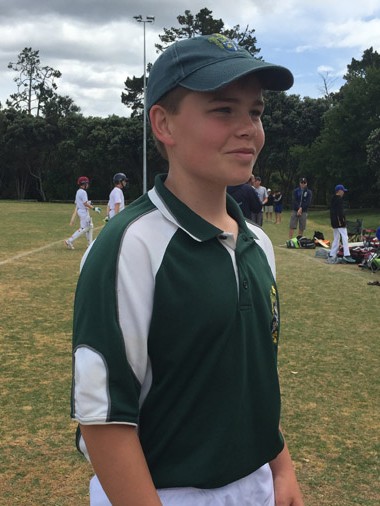 Murray Gannaway was one of the Club of Origin Players.

After a shaky start to our batting reply Anuj Patel (36) & Sam Brewis (33) put on 68 for the 3rd wicket featuring some lusty hitting from both boys. Steady batting from Ryan Zent (25*), Tarin Nambir and Ewan Bennie closed out the game for us in with ease at 139/6.

These two wins saw us to the final v North Shore 20/03/16.
After winning through to the final in style (the second year in a row that BCCC has achieved this feat) we faced a top North Shore side filled with Harbour Reps and College First XI players. Unfortunately we were missing some key players and our bowling attack was depleted by injury so the opposition piled on 280 runs. Short boundaries didn’t help our cause although Ben Haigh-McShane, our last-minute ring-in, chipped in with some tidy slow bowling getting out one of their top scorers. All of the other bowlers including Ewan Bennie who bowled a good spell taking the wicket of their top scorer did their jobs as well.

However, our reply was not convincing apart from a short stint of power hitting from Sam Brewis (18 runs) who hit a big six that landed in the middle of another game. We were all out for 91.

All in all the final game was played in good spirit and the boys had fun, a testament to the Club of Origin doing its job by bringing the players together again as a team representing the club at which they played their childhood cricket.  All boys made contributions in the games they played and should be proud of their efforts, and really it was big-ups to BCCC making the final without a coach. (Would like to remedy this next year!)

The team and parents were most grateful to have Ray Gannaway as umpire for all three games and thanks also to the parents who helped with scoring and getting the boys to games far and wide. Unfortunately there wasn’t a photographer in their midst so we don’t have any shots other than the grainy one above. Again, next year! Finally thanks to Allan Taylor for his efforts to keep Club of Origin alive. – David Brewis, helper