Century scored and 4As win thriller

Opening batsman Seton Wingfield scored the 4As’ first ton of the season with 108 in a cracker victory for the team at home against Eden Roskill on January 18. 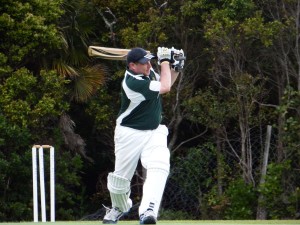 Chasing Eden Roskill’s 252 (all out), Seton’s 108 (out lbw) was the perfect start for the 4As, captained by Damian Hagoort aka Damo, as they kicked off their post-Christmas part of the season following a month of good healthy food and lifestyles.

He was well supported by Neil Molesworth batting three who got 49 and picked up the run rate well. There were some big overs and big boundaries (plenty of dents to cars) along with plenty of singles.

Things looked a little rocky with Neil’s departure but some sensible batting proved that getting in and staying in will get you runs as Seton then combined with the middle order to get his maiden century 108 with some crisp hitting and hitting the gaps. Plenty of water helped.

The Steves (Kilgallon and Thompson) chipped in with some handy runs at the end of the innings before a slightly ropey lbw meant the experienced finishers Steve T and Jeff had to complete the job. Steve T decided that was a good time to hit his first aerial 6 to help reduce the asking rate to 1 run off 1 ball.

At this point there were groans of “not another draw” from the stand before a chancy leg bye was run and the BCCC boys got over the line for the loss of 7 wickets.

Earlier in the day, the team wondered if the opposition were going to turn up with a late start eventually happening. The game started well for BCCC with some early wickets due to some sharp fielding and good bowling. The opposition were 88 for 4 and Damo’s men looked good before the opposition’s middle order ended up getting the bulk of the runs and causing a few more dents!

At one stage 300 plus was looking likely but some tight fielding from the younger members and good-length bowling prevented at least 40 runs being added to their score.

Neil’s dad Elliott conceded exactly 50 off his bowling efforts but managed to snare three wickets along the way, with Dan Thompson picking up two and Jeff and Gary one each.

It was good to get the opportunity for a cold beer and see Seton walk the team through his ton and congratulate Elliott on beating his son’s score … albeit through runs conceded in his bowling.

(Thanks to Colin Watson for the info.)