The Birkenhead Premier Men lost on first innings to Papatoetoe over the weekend, but were able to save a draw and sit at second place in the two-day Hedley Howarth championship.

Birkenhead won the toss on a dry and hard wicket and chose to bat first. The two openers Dylan Steyn (50) and Jaycob Curtling put on a fine opening stand but with the introduction of spin at both ends, fortunes changed. Papatoetoe’s two offspinners took all 10 wickets to dismiss Birkenhead for 168, with James Glynn showing some resistance to score 33.

The home side’s reply started with an early wicket thanks to a great diving catch by Rudi Botadra from the bowling of Evans. With the Papatoetoe wicket spinning, we turned to our spinners but unfortunately key bowler Aaron Jeavons suffered a groin injury and in considerable discomfort, was unable to bowl.

Leg-spinner Sahil Mehta did not hit the mark on a wicket that should have been assisting him, and was unable to find a consistent length. With the seam bowlers ineffective, Birkenhead turned to part-time spinner Connor Ridge who claimed a couple of wickets, but at some cost. 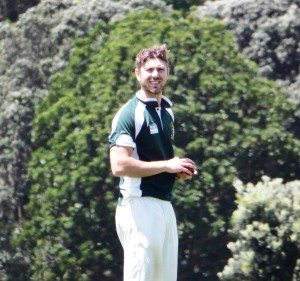 Coach Neil Fletcher asked new recruit Matt Latham to convert from medium pace to offspin in his first game for the Head, and Latham did a reasonable job minimising the scoring rate. But at stumps on the first day Papatoetoe had first innings points and a 20-run lead with only five wickets down.

Day two saw the introduction of Akash Christian replacing Terry Crabb, and AK’s offspin was vital in capturing some early wickets, taking 3 for 30. The hosts batted on to get 262, creating a 94-run lead. Birkenhead’s innings started poorly with Curtling given out by an unbelievable bat/pad decision for a duck. The cause wasn’t helped with in-form Steyn being run out in the second over.

With Jeavons injured, the batting order was reshuffled, and Matt Latham looked solid at No 4. Rob McConnochie batted for a long time, facing 100 balls to try and save the game. Top scorer was the unlikely Robert Evans, usually at No. 11, but ont  he back of some recent form was promoted to No. 8. Evans batted a long time for his 38 runs, and showed a wide range of sweep shots, pull shots and cover drives.

Jeavons batted injured at No. 10 and scored 34* with the aide of a runner. Birkenhead were finally dismissed with a 124-run lead, and the hosts had 10 overs to try and knock them off. Mehta and AK both got direct-hit runouts and the Head lads picked up 5 wickets with Papatoetoe making it to 57 from their 10 overs.

It was a tough match, marred by some “interesting”  umpiring decisions, which unfortunately had a big impact on the game, to the frustration of both teams.

This week Birkenhead takes on Howick Pak on Dec 13 and 20, at home. Get along and support your team!