The year 7 Premier side had another great win and the mighty Year 5 Cobras ended the season on a high. This is the last round of match reports for the season. See you at the junior prizegiving at Sunday April 17 at 3pm.

The Birkenhead Cobras were back at Glenfield Intermediate School  – this time to play NSCC Devonport Rotary. Captain Ryan S won the toss and elected to bowl first. The Cobras continued where they left off last week, with tight bowling and energetic fielding restricting the runs. A fiery spell of bowling from Alfie gave him the very impressive figures of 3 overs, 2 maidens, 3 wickets for 2 runs! He was backed up by Ryan S and Jackson who got a wicket apiece and Cameron took a very sharp catch to give Ben a wicket too.

The boys really showed how much they had improved their communication in the field – putting pressure on the batsmen and the result was two great run-outs, one where Ben threw down the stumps from deep in the field. NSCC finished on 156 runs.

After last week’s result, the Cobras were confident that they could knock the runs off and Brodie and Cameron got them off to a great start, both hitting boundaries in their innings. Alfie and Jackson were in next and decided to see if they could finish the game there and then – Alfie in particular took
apart the NSCC bowlers, hitting 46 runs that included numerous boundaries and a big 6! Ben and Joe batted third and kept the score ticking over, getting better as their innings progressed.

The final partnership was Krish and Ryan aka “The Finishers” (after their great innings last week). They again combined well to ensure that the result was never in doubt, with the Birkenhead Cobras finishing on 210 runs for a convincing WIN!

Congratulations to Alfie – his great spell of bowling combined with his destructive batting meant that he was the clear choice for player of the day.

It was a wonderful way to finish the season and the boys were all very proud after being complimented by the opposition who did not expect to be outplayed by a much younger team. This team of Year 4 players who have moved up a grade have really proved their ability in the step-up this season. They won three of their six games and drew one, in what was expected to be a tough grade for them, but they proved their talent.

Go the mighty Cobras and see you back next season! – Martin Bell

We have had a great season of cricket, played at lots of magical places like Onepoto. As a team we have all collectively worked on different areas of the games and loved being together each Saturday playing. We have had disappointments plenty with our batting ability this season and have often fallen quick and early. We have also had some real positives in our batsmen, with Sam H starting the season with the mantra of “I will retire” and doing it in the first game and then again. Others to retire included Sam K, Jackson, Damon and Shiv. Navick faced 45 balls in one innings and was not out for 27, and was so determined.

Today’s game against Hibiscus Coast White saw us post 135 for 8 and it was a united team effort, including a good knock by Sam Hazeldine who retired on 34 off 31, including 6x4s.  Stand-in coach Gary Whale had said “McDonald’s shout on him” for the team if they won (not sure if this is good or bad but the boys seemed to think it was good) and that gave the team a sense of urgency. However in reply, Hibiscus’s first wicket didn’t fall until the scoreboard said 66 and their aggressive chase of the total meant even with four wickets taken by Jack Whale, Sam Kay and two caught and bowleds by Jackson Walsh (3 overs, 2/14), we once again faced tension in the last over of the game. Hibiscus needed 2 runs to win. Shiv bowled an almost perfect maiden over, but unfortunately some runs came and they won so it was no McDonald’s for the boys.

But the prize for everyone watching was the boys’ team spirit, encapsulated by Tom Beattie who turned up, bowled two overs and worked the field  with his natural flair and talent – all concealing his fibreglass cast. That is dedication, that’s what being a team player is and that is cricket. And that is the season! – Tina Walsh

Curtling had a bye but what a season they’ve had! Played 14, won 12 and have finished second in the grade (to a team that’s played one more game than them – who knows how that works?).  Such a great season for this team of passionate cricketers who would like to thank their marvellous scorer Rebecca and everyone else who helped with scoring, also Jaycob Curtling our namesake co-coach, and our coach Matt Godward. See you next season.

Under 12 girls, the Dragons

The girls’ final game was against the competition leaders and it was not an easy game.  In the bowling, Brooke took 2/6 off 3, Rebecca 1/29 off 4, and Rose 1/2 off 2. But Cornwall Carnachan put on 132 which was going to be tough against such a good side.

In our batting innings, Molly was the only one to make double figures (10) and unfortunately we were all out for 61.

But that game was in no way a reflection of the girls’ season. In the rounds before Christmas we won our grade and will head to Eden Park next week to collect our award for that! On the strength of winning that grade, we were promoted a grade in our first season of hardball. We ended up fourth in the second round playing in the Junior Hearts 12A  grade. It was tough but it will have made us stronger players for next year.

Our first season of hardball has been a learning curve for the girls but they have done their coaches, parents and the club very proud. Thanks to coach Kevin (and for the medals and easter bunnies we got on our last game!) and to manager Stacey and all the parents who have helped out during the season.

Pacers played Waitakere Panthers in the final which unfortunately wasn’t to be. Read the full final report here.

Prems finish the season on a high
BCCC Y7 Strikers comfortably beat Kumeu Fistonich by 30 runs to finish the season on a high, bagging their fourth victory in their past six games, a great turnaround from the first half of the season that shows how far this team has come.
After losing the toss and being asked to bat, BCCC Strikers batted cautiously to start, wary of a newly laid, bouncy deck and a very slow outfield.  Scoring runs was always going to be tough and BCCC  were in a bit of trouble at 53/3 after 18 overs. However our middle order held firm and a brilliant 102-run unbeaten partnership between Pat Faulkner (53*) and Spike Ruffell (45*) pulled the game away from Kumeu, with some  powerful  boundary hitting and two memorable sixes (one each to Spike and Pat) to post an impressive 166/5 at the close.
The Strikers then took the field confident that a good bowling performance stood between them and victory. With a blustery wind and damp track, bowling was always going to be tough, but some excellent all-round bowling kept Kumeu on the back foot for most of the match, and despite a late flurry of runs, BCCC cantered home to victory in the end.
Jason (4 overs, 1/11) got the initial breakthrough in the 12 over, with great support from Trav (4 overs, 0/5), Spike (3 overs 0/4), and Pat (4 overs, 1/4). Kumeu were well behind at the drinks breaks, wickets tumbled at regular intervals and a great run out by Cam Smith, signalled the start of the end. Wickets to Harry (4.3 overs 2/15), Cam (5 overs 1/29), Nathan L (3 overs, 1/10), Nathan H (5 overs 1/18), Pat and Jared (3 overs 1/8) cleaned up the tail and BCCC were able to celebrate a great team effort.
Well done to Pat Faulkner on his second 50 of the season (53*) and congrats to Pat & Spike (45*) on their century partnership.
Thanks to the parents for all the help in scoring, umpiring, baggage handling and taxi services – it has been a great season and really appreciate all your help and efforts. – Steve Ruffell
BCCC 166/5 (40) beat Kumeu 136 (38.4)
Scorecard here 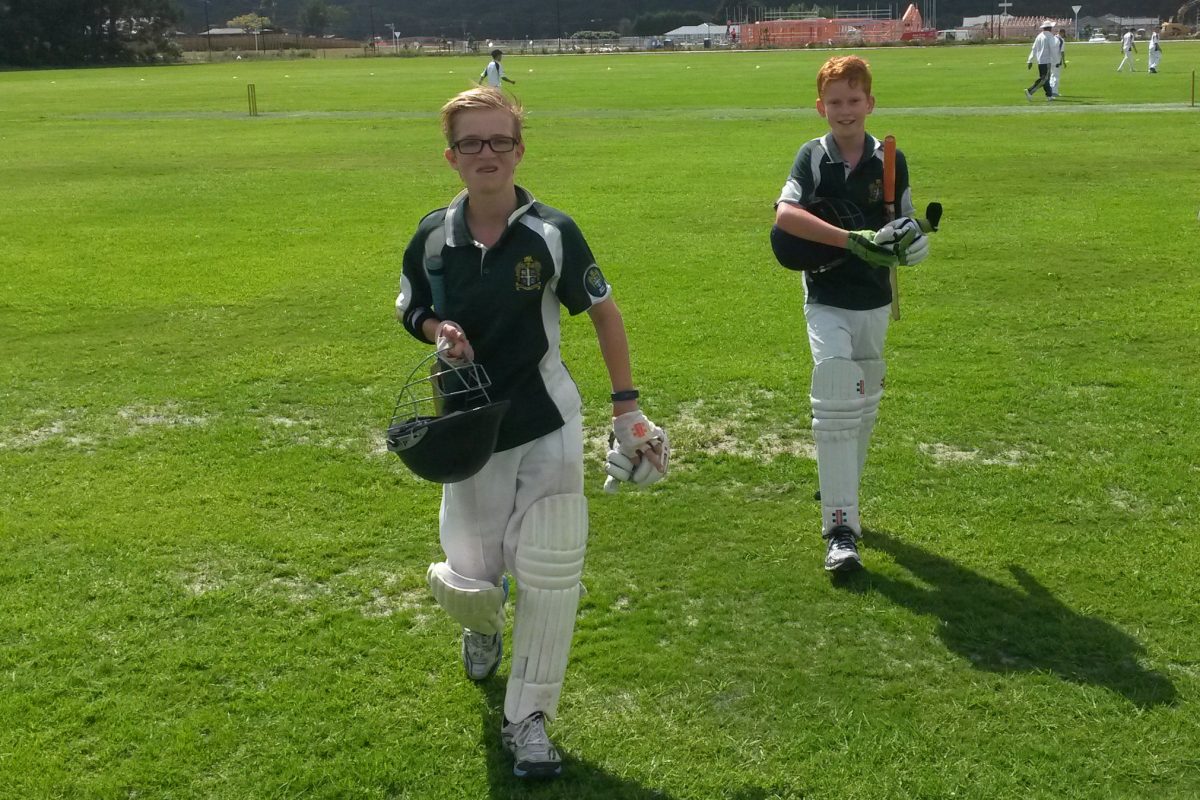 Please support the club by buying an entertainment book before April 5. 20% off each purchase goes towards buying much-needed gear.

Please support the club by buying your entertainment book. You save, we earn!

Click the image to read about how to do it.