Not the greatest conditions to play in, with intermittent rain and drizzle but the boys stuck it out. We batted first against NSCC Lonestar and had a great start with Harry (31) and Josh (11) putting on 42 runs for the first partnership. We also saw our first 6 of the season. As we were down to 7 players Jared batted twice and made a score of 16. Cameron’s contribution of 12 runs was also a great effort and as we were two players short this week, we really appreciated him filling in. We still need a bit of work on communication and running between the wickets. Sliding the bat is also something that lets us down at times, but these are all things which we can easily work on. All in all this week was a much improved batting effort.
Our fielding was a bit of a mixed bag, not really helped by the wet conditions. Cameron was the standout with the ball and ended up with 4 wickets. Harry took 2 and Toby and Jared one apiece. Harry also took a good catch. One area we have room to improve on is with extras and backing up in the field but all in all we are improving as a team week on week.   BCCC (160) lost to NSCC (217)
(Report, Greg Hart)

Birkenhead Curtling played Hibiscus Coast at Birkenhead War Memorial Park. Alex Godward, who had been on crutches the previous week, returned to the side to score 24 off 29 balls. Other notable runscorers were Everton O’Leary (18), Ollie Leitner (15) and Sam Godward (13). It was a good team effort to get to 133 for nine, helped along by 47 extras.
In reply Hibiscus Coast were only able to reach 97 for five from their 28 overs. It was an excellent bowling effort from Curtling, who bowled only 3 wides and 2 no balls in the whole innings. Jasper Watson took 3/7 from three overs, all bowled, plus a catch off Everton’s bowling. Everton finished with 2/11 off four overs. Great effort by theam who are going really well. (Report – Rebecca Hawkins) 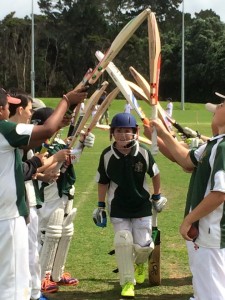 Birthday boy Jackson Walsh is given the walk of honour for his 40* opening for BCCC Green.

What a game and season this team is having so far. North Shore CC Taniwha won the toss and elected to bat. Sam Hazeldine had another good day, this time with the ball by taking 2/7 off his 3 overs. Also economical was Curtis Marsh with 1/7 and wickets also went to Liam Carter, Sam Kay, Jackson Walsh and  Damon Rickman meaning it was a real team effort that restricted North Shore to 95 off their 28 overs.

In reply Jackson Walsh found the best way possible to celebrate his birthday by retiring on 40 (off 23), leading his team to an impressive victory 96/5 in just 14 overs!  (Report Kate Hazeldine)

On a damp and overcast morning Birkenhead Pacers hosted Papatoetoe at Birkenhead College. The visitors won the toss and elected to bat. Captain Vivek and his team were pleased as the outfield was so wet that boundaries would be hard to come by early in the morning.
Sure enough, conditions favoured the bowlers, with Joe Fell taking two wickets in his first over. By the end of the fourth over they were five wickets down with runs only just in double figures. Joe Fell ended up with 4 for just 8. Also noteworthy in the bowling attack were Taine Victor with 2/3 runs, and Vivek with 2/7. Catches from Vivek Patel and Joseph Reid helped move things along well. Jeremy Ballard played as keeper for the whole innings for the first time, helping to restrict the byes. At one point the visitors looked unlikely to make 50 but a spirited last-wicket partnership took them to 72, with almost half that score provided by Mr Extras.

Any hopes of an easy win were soon dashed after Birkenhead gave away wickets cheaply, with Joe Fell out for a golden duck. Seb Marsh was the only player to make double figures, and only he, Joseph Reid and Ben Simpkin found the boundary. Captain Vivek came in at number 11, too late to make a difference as Birkenhead were all out for 52. A very disappointing result after such a promising start. (Report, Andy Ballard)

Birkenhead Strikers played Takapuna Gold Arthur. Captain for the day Harry Carter won the toss and elected to bat on a hard and bouncy track. Our top order struggled against some tight Takapuna bowling and wickets tumbled regularly to leave BCCC reeling at 63/6 at the 20 over drinks break. The Birkenhead lower order dug deep and lead by Jesse Hohaia (38*), put on 80 valuable runs to finish up 145/9 after 40 overs.

With skies darkening, the Strikers bowled with plenty of fire to have Takapuna struggling a bit at 63/3 after 13 overs. Heavy rain interrupted play in the 21st over and the re-adjusted target left Takapuna needing a further 30 runs off 13 overs. Conditions were very tough for the bowlers but credit to the Strikers they set about their task with real great intensity. More drama followed with 3 quick wickets , including 2 wickets in 2 balls to Jason – all adding to a very tense finish.

In the end, we paid the price for a slow start, and Takapuna won by 4 wickets with just an over to spare. Disappointing to let this one get away, but a game played with great intensity and some great fight. Our first win is just around the corner…  (Report, Steve Ruffell)

A second week of wet cricket – never an easy task – but the U12 Birkenhead Dragons are a determined bunch. The girls are nearly at full strength with newcomer Jasmin taking a wicket in her first game with the team, so we are very happy to have her and just need one more now for a full complement!

The toss was won by Cornwall Shaari who chose to field. The team battled away to score 74/8 minus wickets (the scoring is modified in this grade so 3 runs are lost for each wicket) meanig the team were defending 50 at the end of their innings.

Molly had an impressive bowling game with a wicket bowled, a runout, a maiden and a catch. Amber was our Player of the Day for her amazing job behind the wickets and her positive energy on the field and Annabel received our Outstanding Effort Award for a run out and fielding skills saving several runs. In a tight-run game the Dragons came out on top again, winning by seven runs.

A big shout out to Wagas and Pete for umpiring this game – we really appreciate our parent helpers.

This weekend the girls are looking forward to their first ever home game – get down and see them and give them a cheer at Birkenhead War Memorial. 8.30am start. Hoping for better weather! (Report, Stacey Nicholas)

For the first time this season 11 players agreed to turn up in this mix-and-match side, the core of which is so keen and desperate for some like-minded players to join them for the last few games of the season! Sadly only six turned up.

But rather than default, we still played and batted first. We scored 143/5 off 23.1 overs with Peter Ruffell helping out and getting 49*. The opposition reached the total in the 21st over which actually isn’t so bad considering we had six fielders, one of whom is the bowler, one the keeper, and one with his arm in plaster. Thanks also to Spike Ruffell from the year 7s for helping us out.  (Report, Andrew Parkinson)

Thanks to all contributors to the Junior Wrap – it’s great. If at all possible to have something to us by Sunday night each week that’s ideal, but we understand everyone is busy so just do your best – or delegate! Email denisemontgomery.cricket@gmail.com and include any pictures.