Coaches/managers if you have time to send anything please do and I will add it when I get it. Pictures very welcome as I didn’t get to any junior games this week. denisemontgomery.cricket@gmail.com

Waiting to hear from coach/manager about result.

East Coast Bays batted first and scored 135/7. We lost by 18 runs, all out for 117. Dominic Hawkins was player of the day, scoring 38 not out, and taking three for five (all clean bowled) plus two catches. Other good performers were Harry with 17, Sam Godward with 12 and Jasper Watson with two wickets.

Despite a valiant effort by Sam Hazeldine who retired again this week – this time for 42 – and Tom Beattie with 21, the side was all out for 125.  ECB Super Kings managed to reach 126 in 22 overs, with two players retiring along the way.  Scorecard. 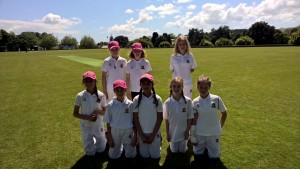 The girls were so looking forward to their first-ever game being played at home. What do you know? The opposition defaulted. So disappointing! However, we got a call to help fill in an U14 Girls team which was a little scary as the girls only had their first hardball game last weekend. Two girls, Rebecca and Molly took up the challenge and did Birkenhead really proud. Not only did they help fill spots, they helped Takapuna get their first win of the season. Both girls held their own against girls much older than themselves. Great effort and we hope you get allocated another home game one week soon, girls.

It was a tough game home versus Howick/Pakuranga on a glorious sunny morning at Birkenhead College. We lost the toss and were put in to bat, loaning a player to the opposition as they only had seven. Orlando took strike first (his first ever stint as an opening batsman) and helped calm our nerves with an early boundary. Unfortunately he was caught and bowled before he could do more damage. At the other end Ben had settled in well and went on to make 27, mostly alongside Shayan who made an impressive 44 including a 6 and eight 4s.
With our run rate dropping but wickets in hand the boys were encouraged to go for death or glory which they duly did. Jeremy and Brandon stole some cheeky runs with Jeremy regularly halfway down the wicket when Brandon hit the ball, but Jeremy was soon bowled for a duck and Brandon was joined by Seb who made 18 and 9 not out respectively. That gave us a total of 150 for 4, 30 shy of last week but one we thought we could comfortably defend.

In the heat of the morning sun the boys struggled to compose themselves in the field, dropping several catches and fumbling four potential run outs. In the end Brandon was our only wicket taker and the visitors romped home to 1/154 off 23 overs. The only bright side was that our wides were just 21 compared to 48 the previous week, with Jeremy, Joe Fell, Taine and William not bowling a single wide. The boys ended feeling frustrated to have lost a winnable game. Here’s to next week!   (Report from manager Andy Ballard)
Note from the club: Great spirit of cricket to loan a player! The main thing is everyone gets to play.

The game was a nail-biter with the Y7 Strikers set 185 runs to win. We had a great opening century partnership from Harry Carter (44 no) and Nathan Lyndon (49), and solid contributions from Spike (26) and Trav (22). Their efforts took us agonisingly close, but it was not to be, with the team losing by 3 runs in the final over. However it was a great game and a good contest – a fantastic game of cricket that was a huge improvement on last week.

The year 8s were on threat of extinction all week with not enough players to make a full team. However some great inter-team and inter-club spirit saw them field 9 players and go oh-so-close to victory. The side made 170 with Murray Gannaway getting 53, Bryn Moloney (Taka player) 40, Tom Hassell 20*. But with only 9 in the field there were a few gaps and with one player, Josh Parkinson, playing with a broken arm, it was always going to be a challenge. Coach Andrew Parkinson reports that the boys bowled and fielded brilliantly and wickets were shared around. In the end they lost by just one wicket which was a great effort. Credit to Josh for taking a catch with a broken arm and also snaring a wicket.
Know anyone who wants to join this team? There are only 6 games to go for the season as the year 8s only play until Xmas. Email parkyz.coaching@xtra.co.nz
Categories
Uncategorized
Tagged
junior cricket birkenhead
0