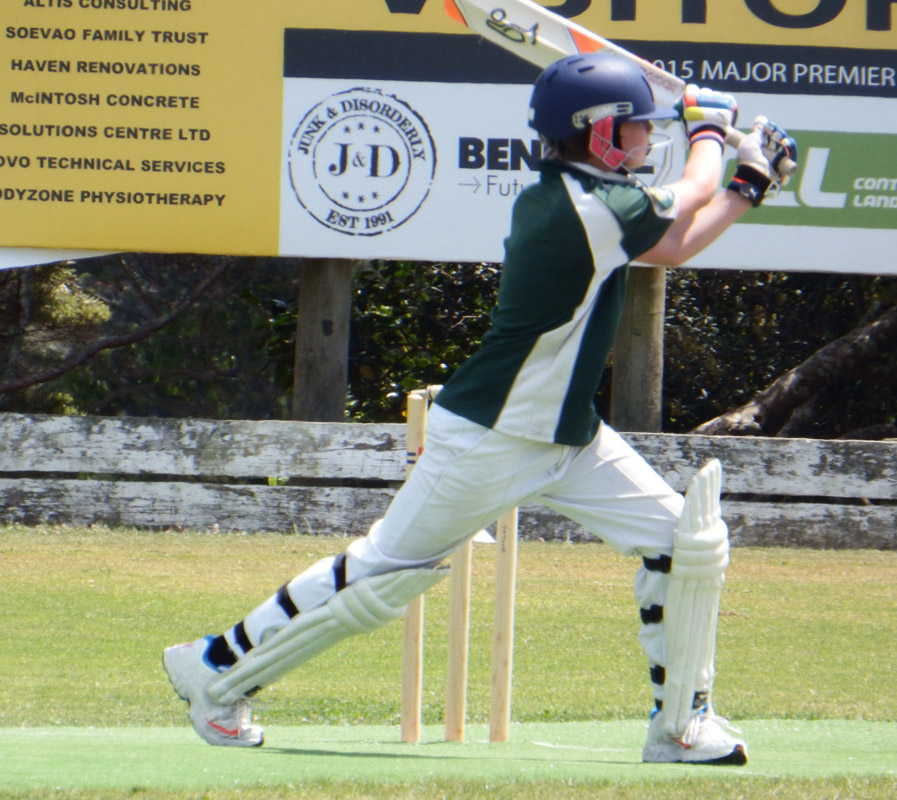 Joseph Reid on the charge. 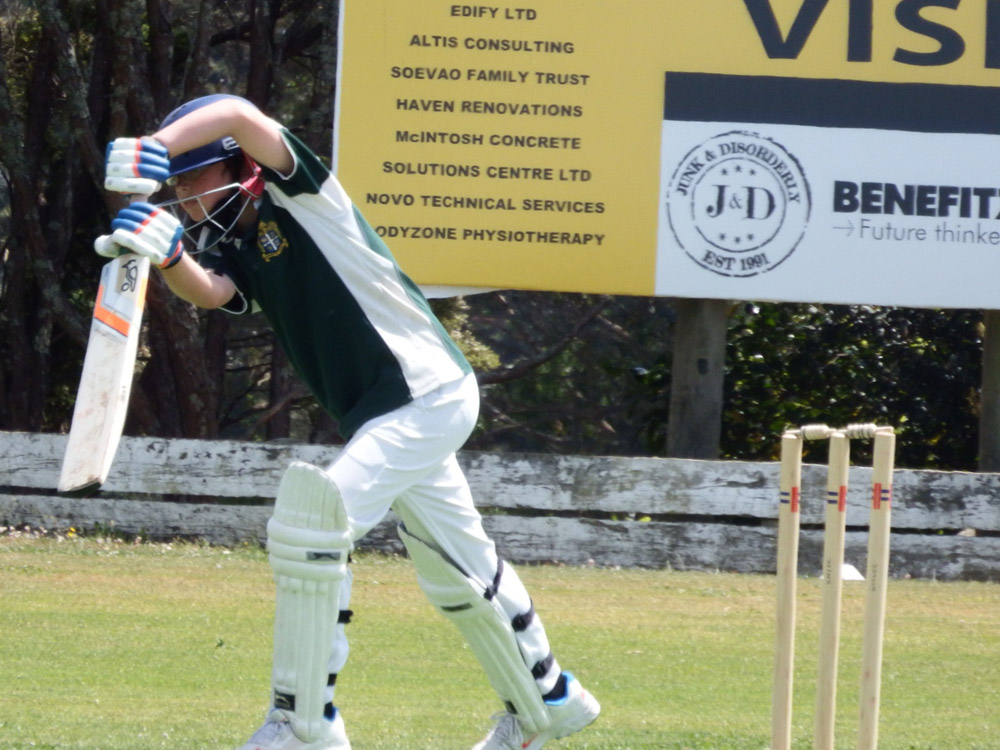 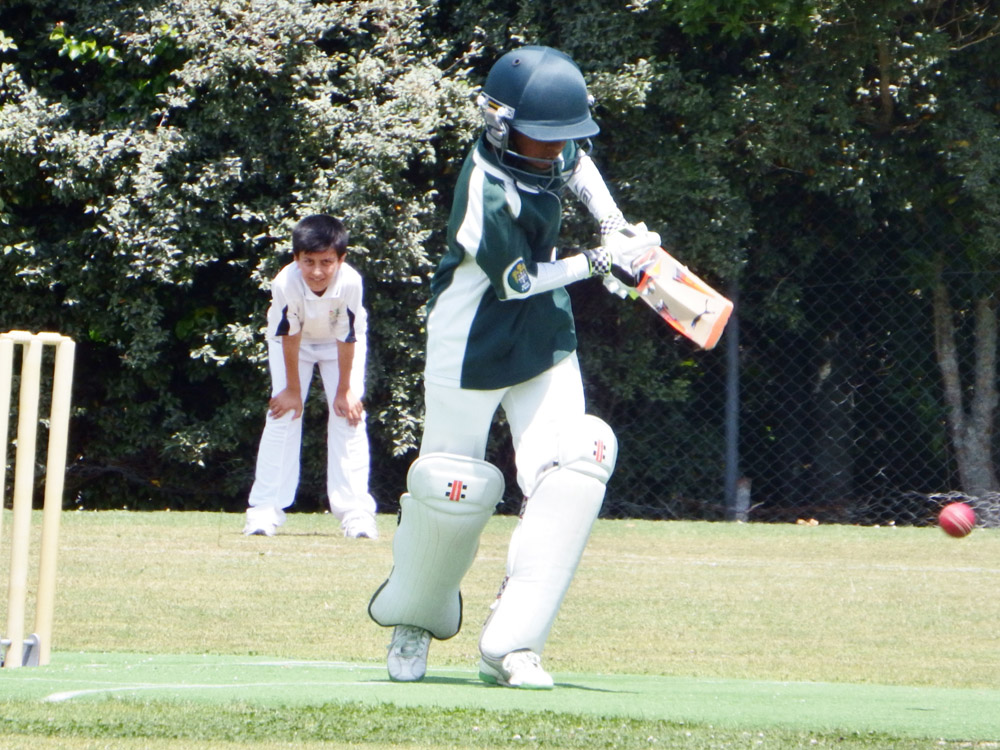 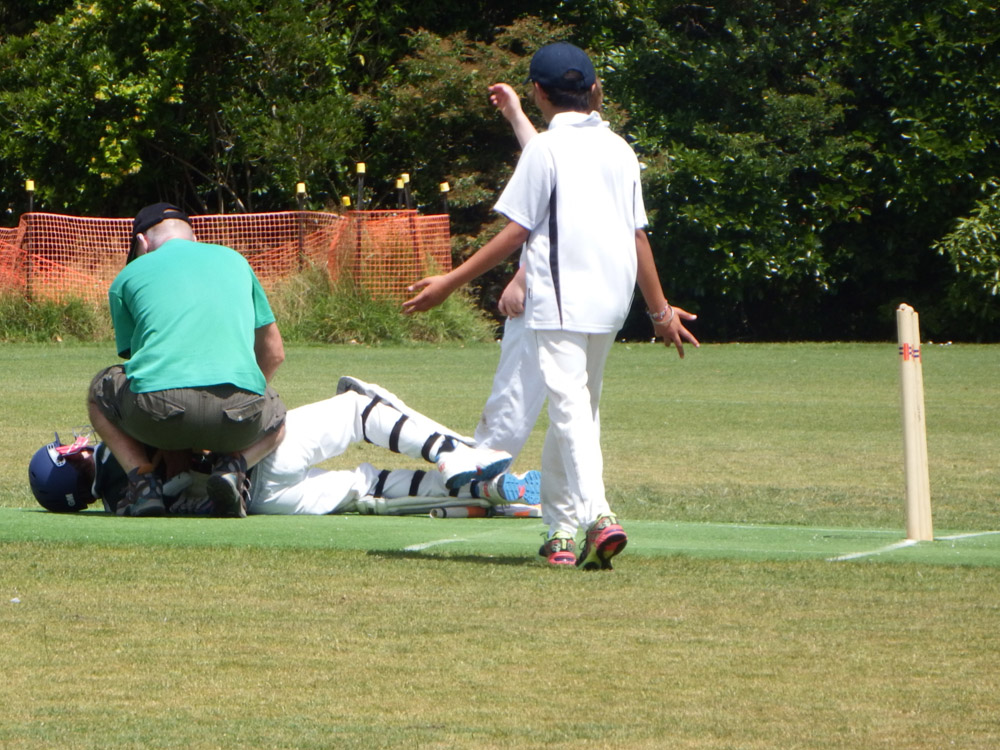 At one point Joseph was felled by a wild throw from the outfield but got up and batted to 44*. 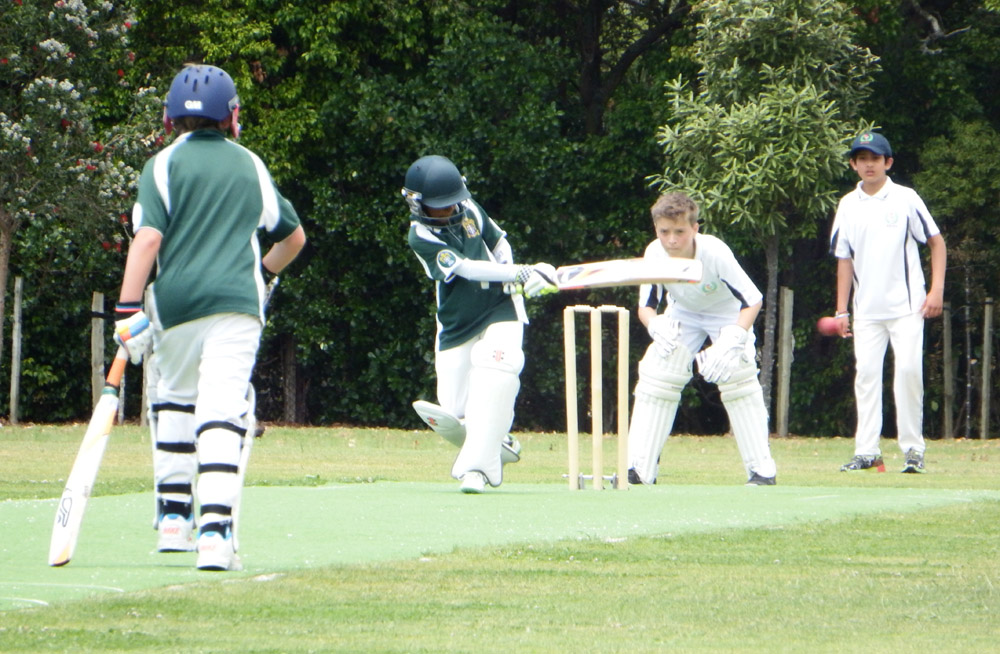 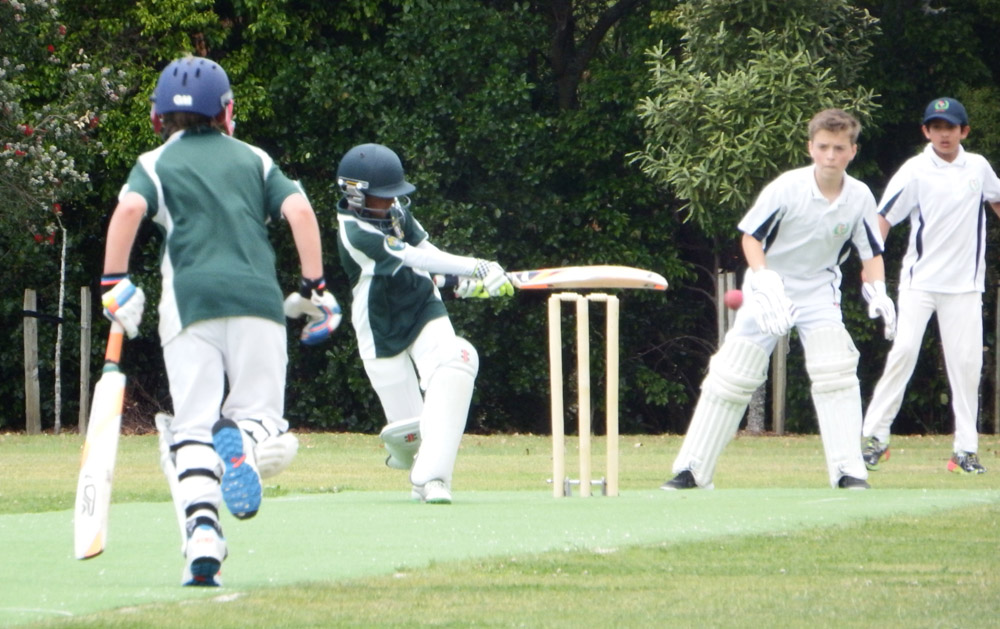 Vivek and Joseph had a 110-run partnership. 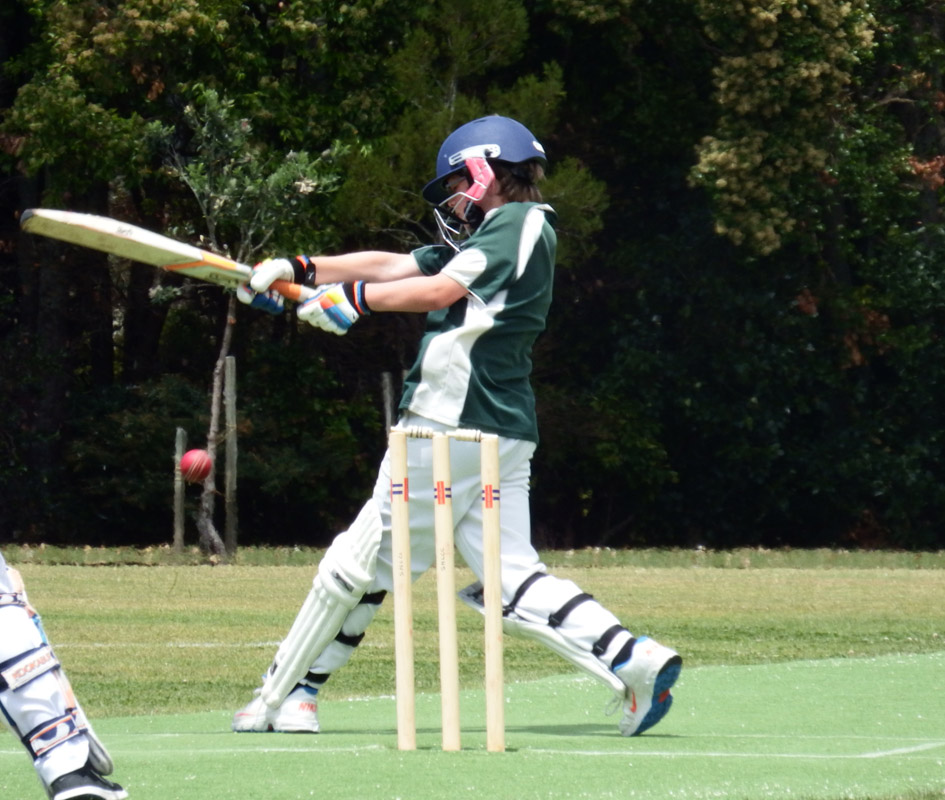 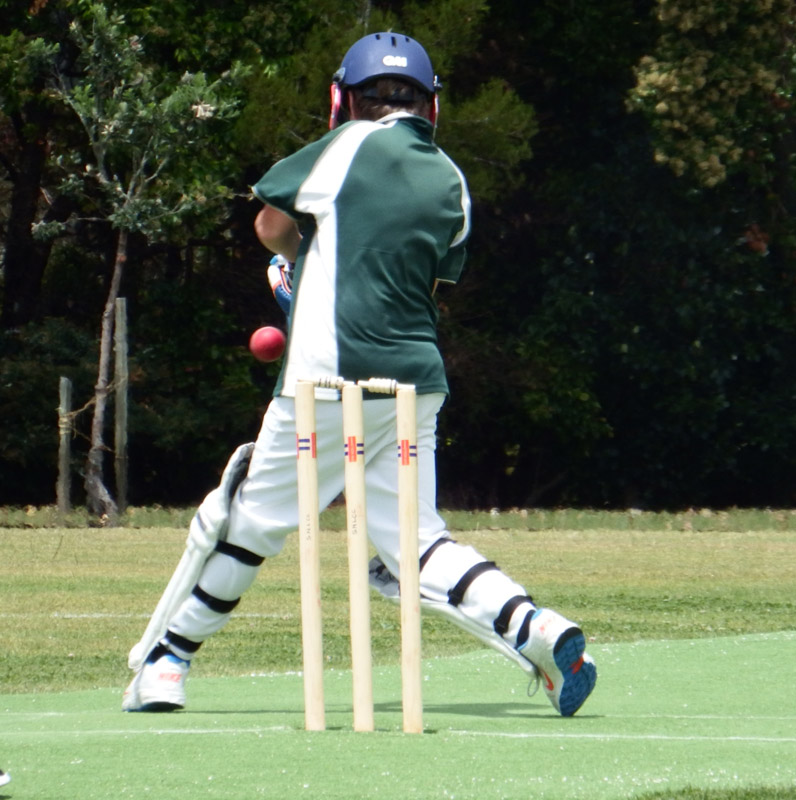 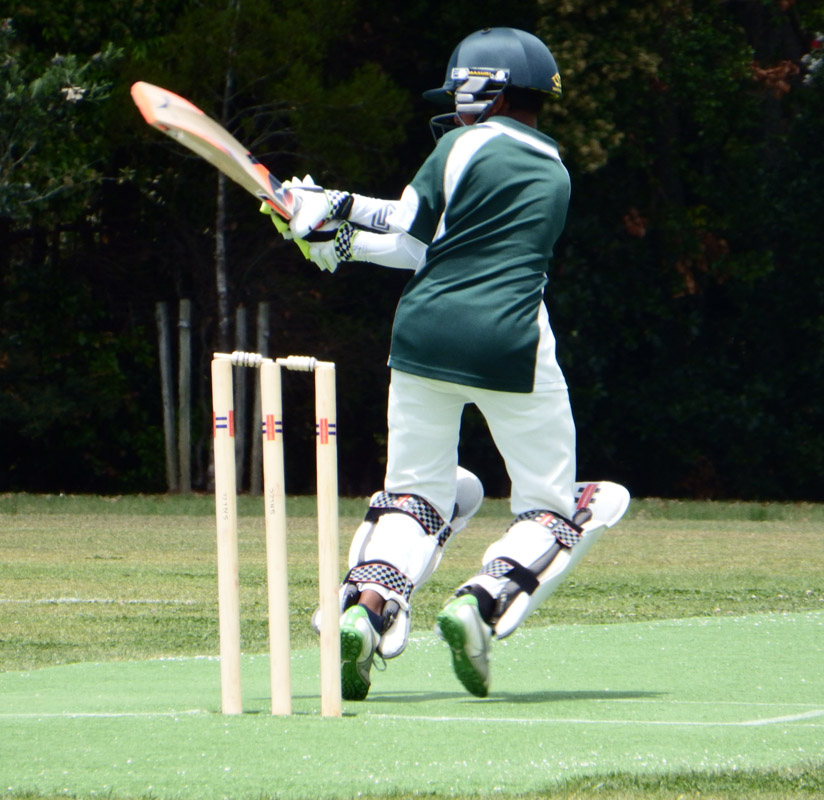 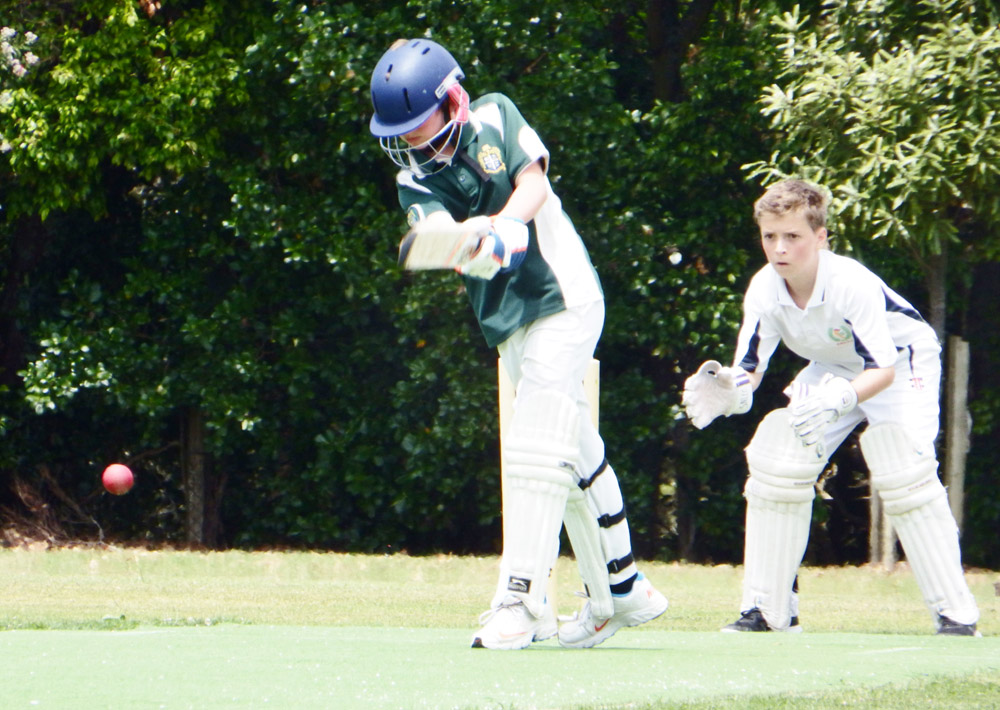 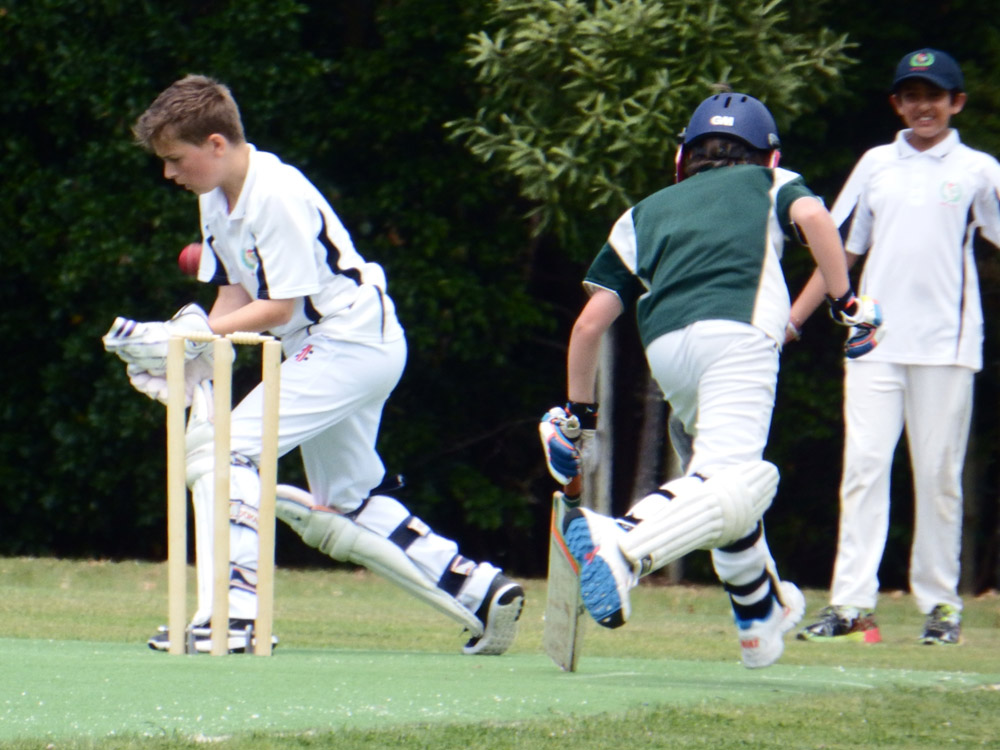 Having a bit of fun while Vivek and Josephy were batting. 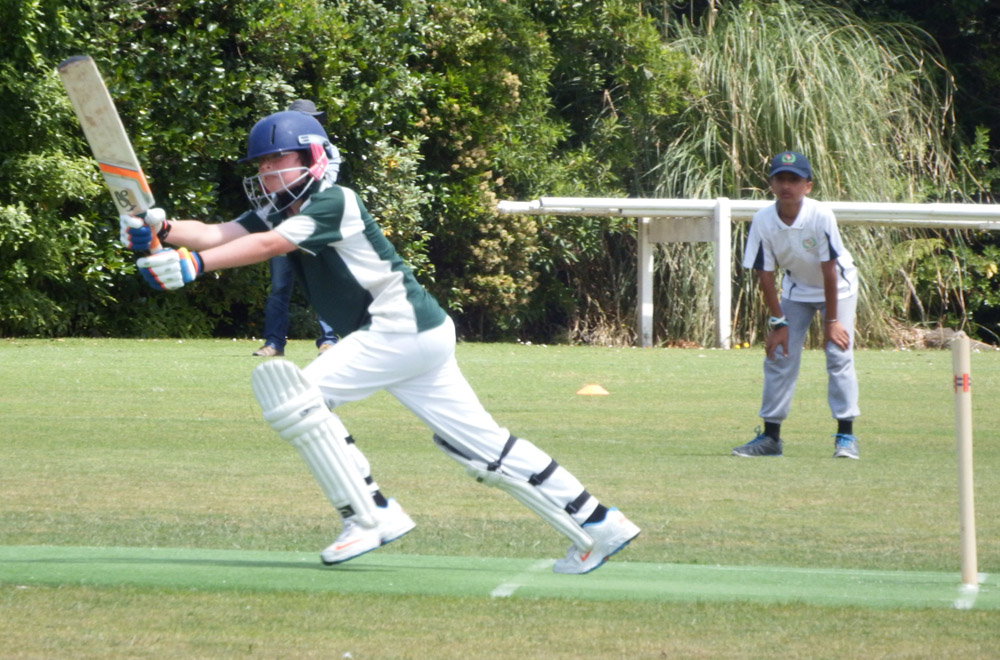 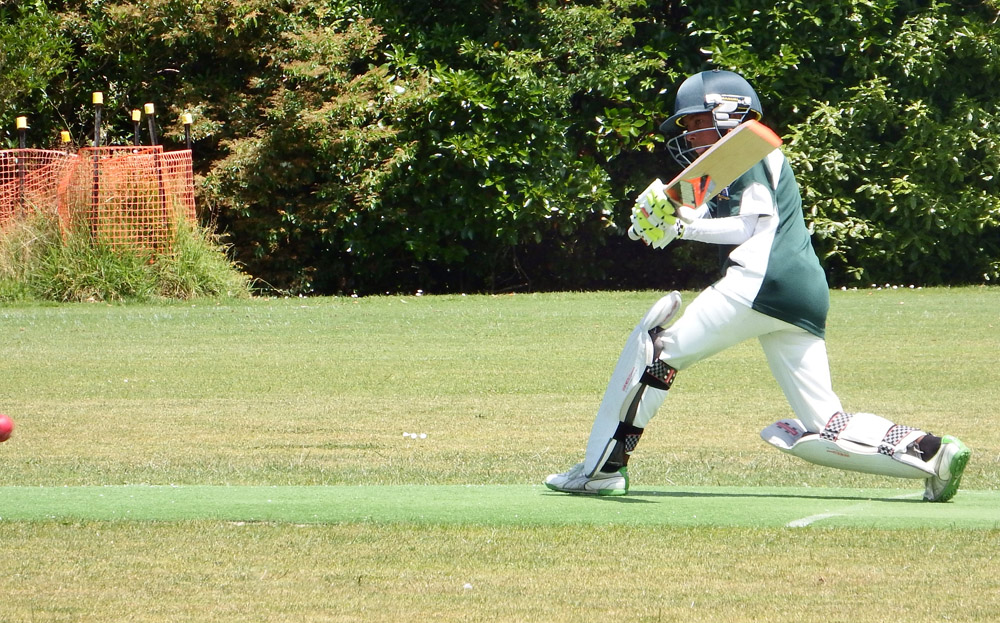 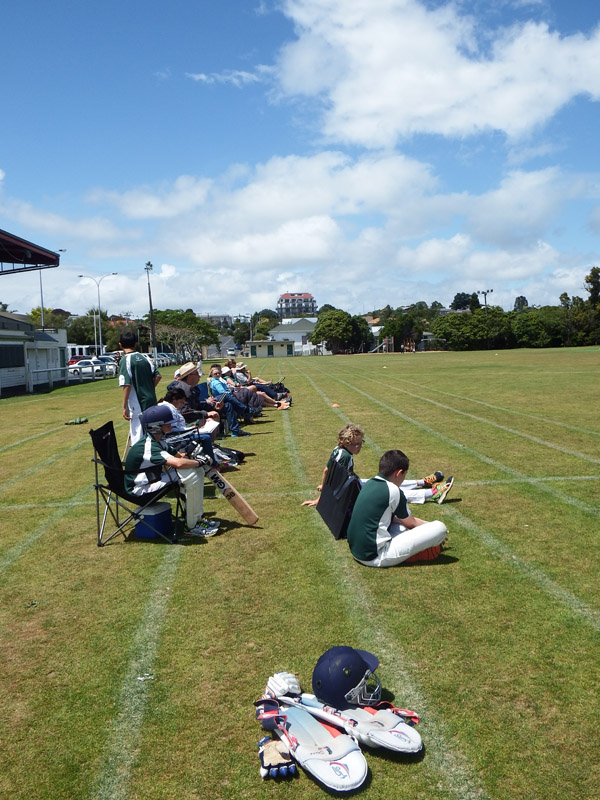 Great day for it. 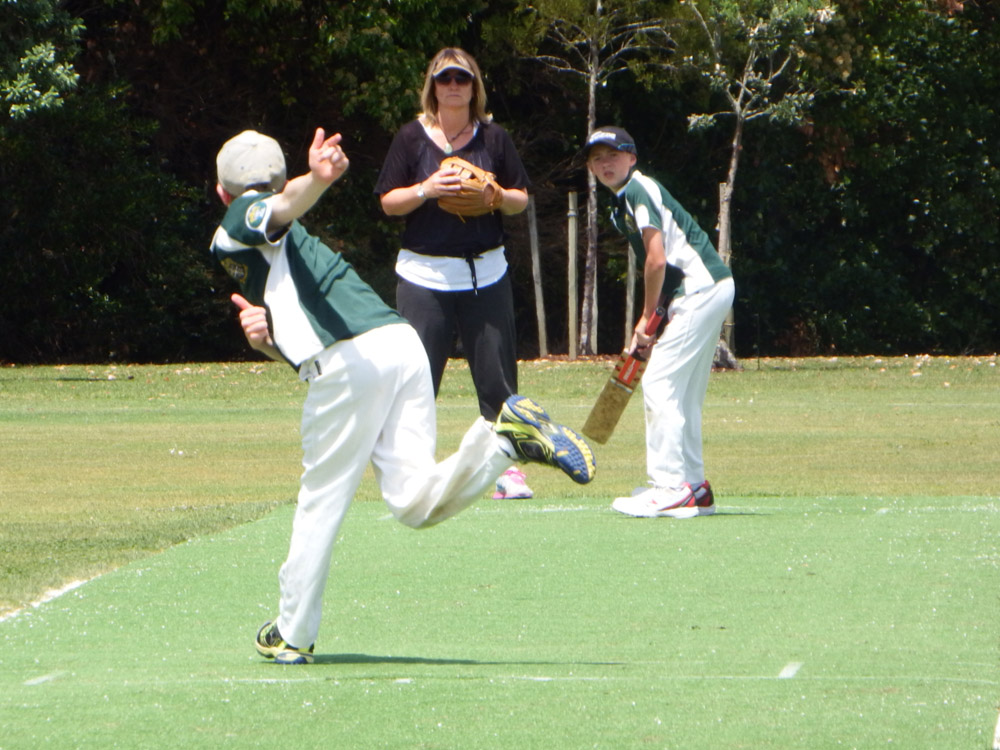 While Vivek and Joseph were batting, others got in some practice. And Mum. 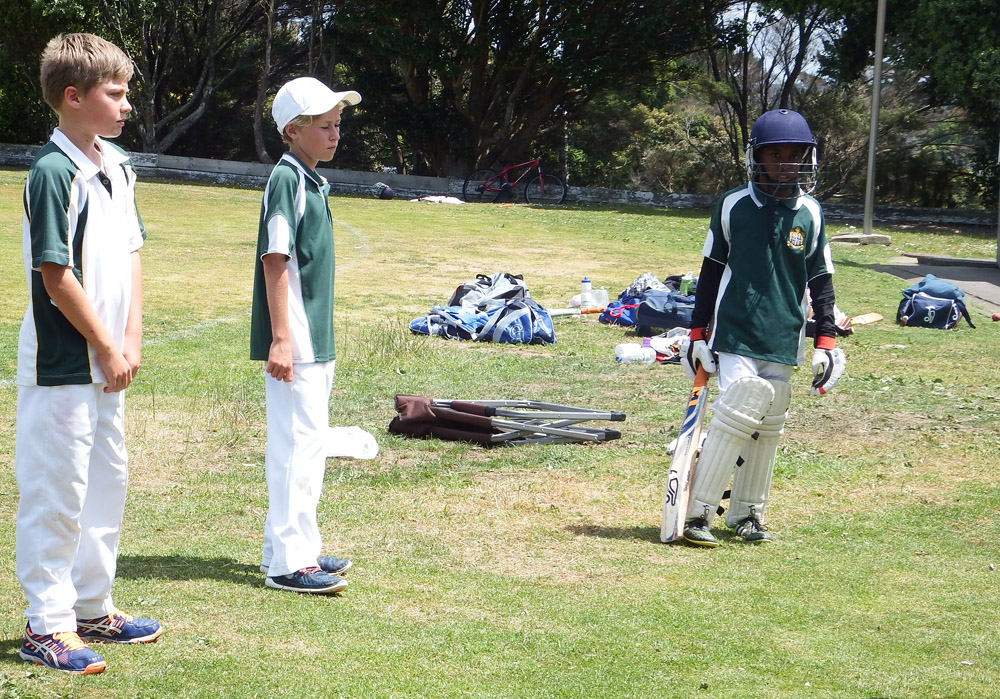 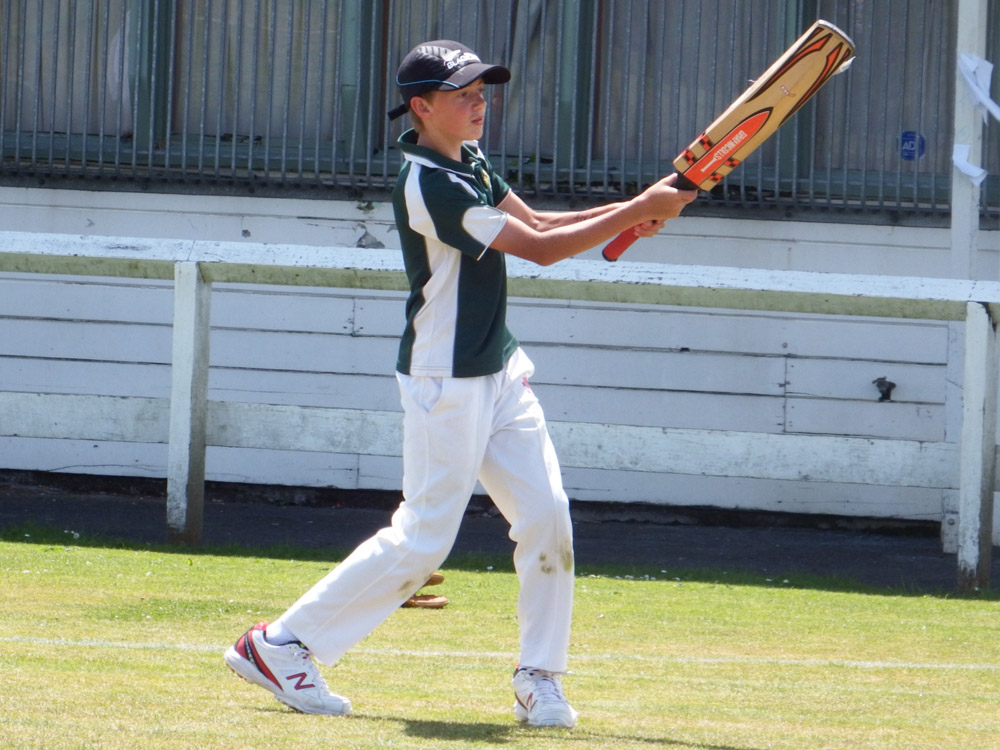 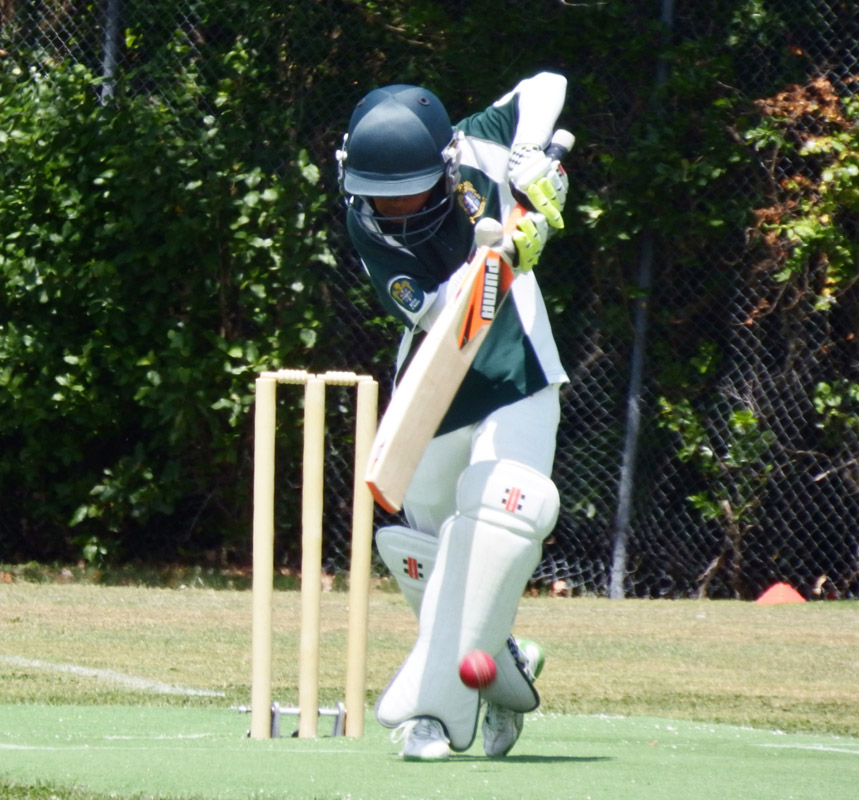 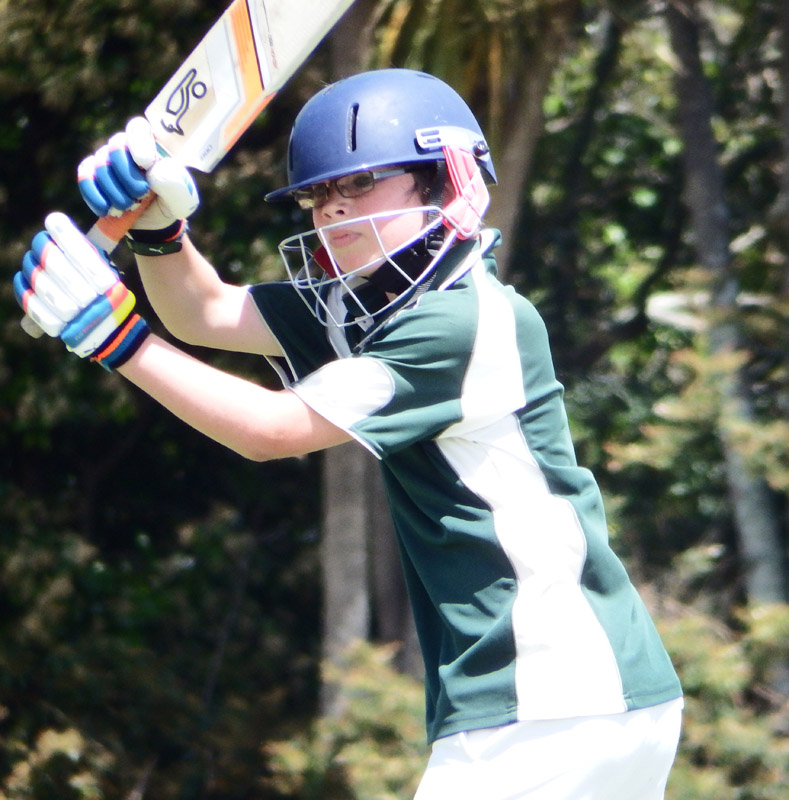 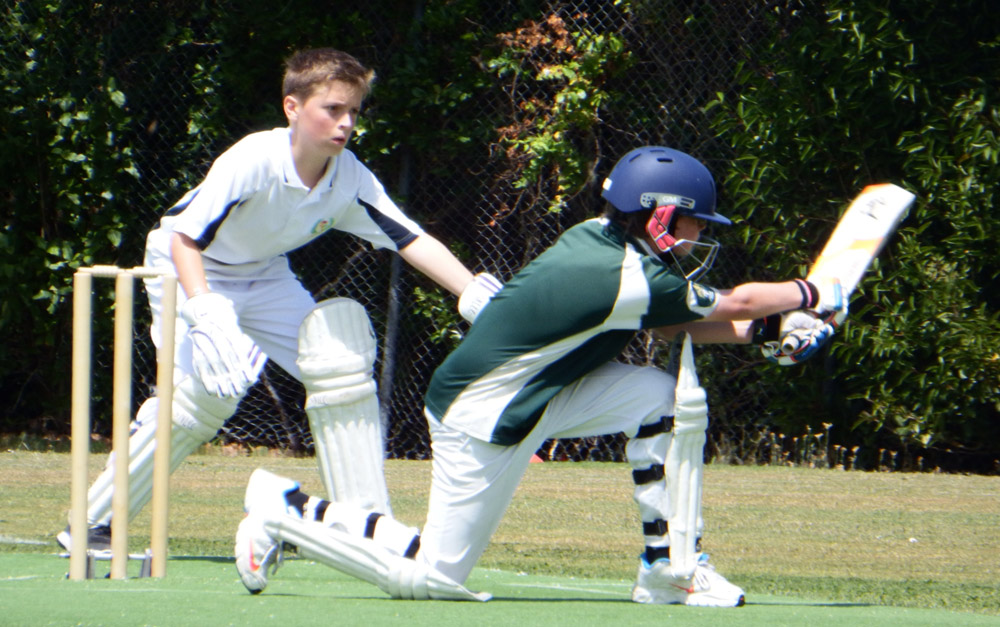 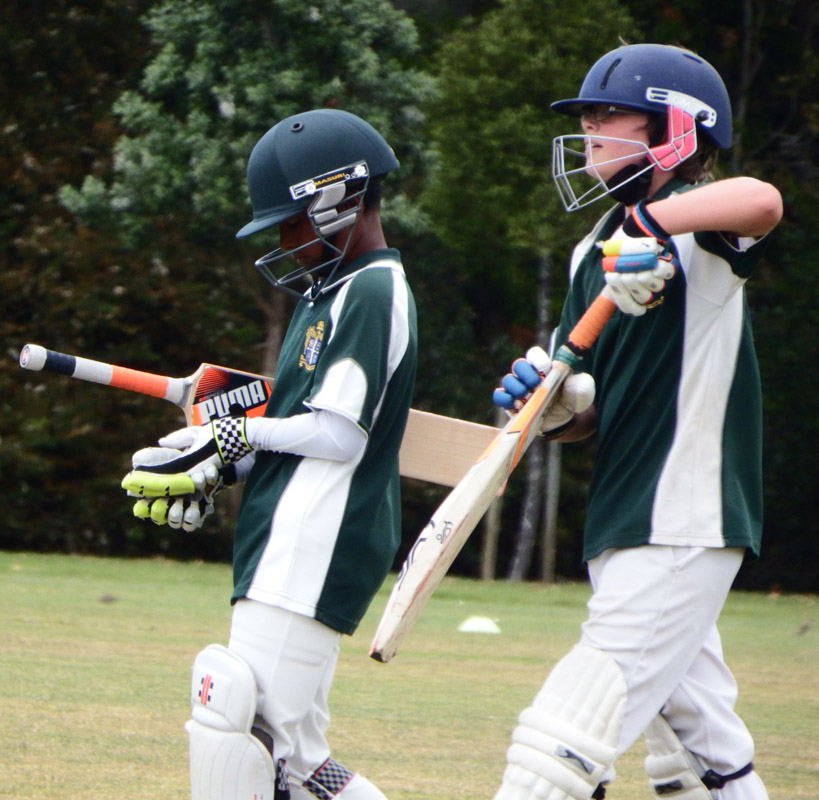 Coming off after sealing the win for the Year 7 Pacers. 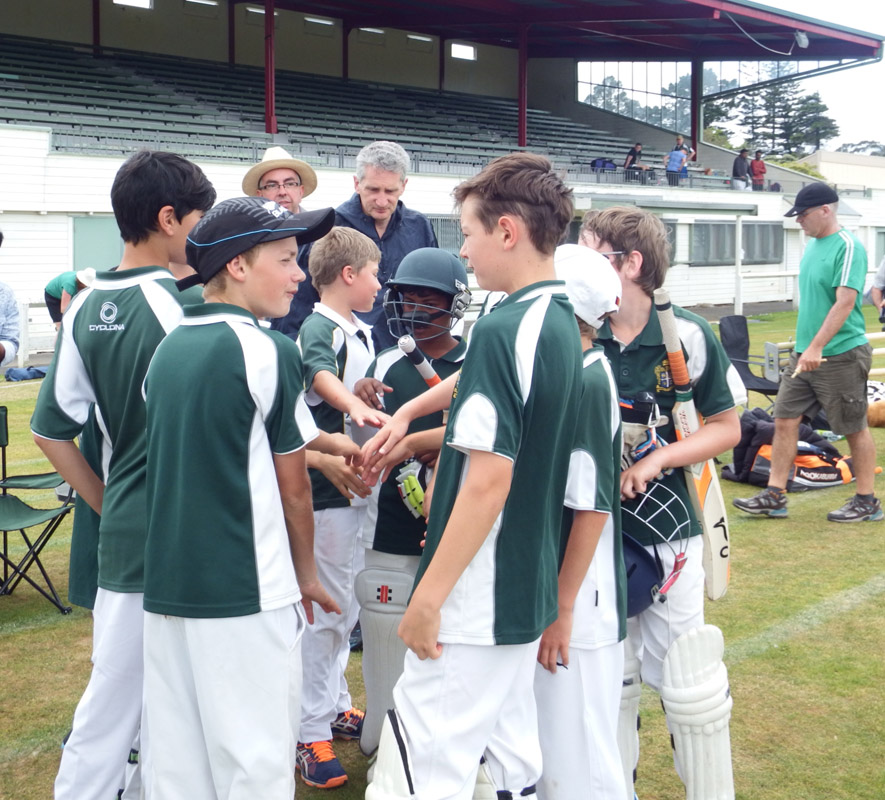 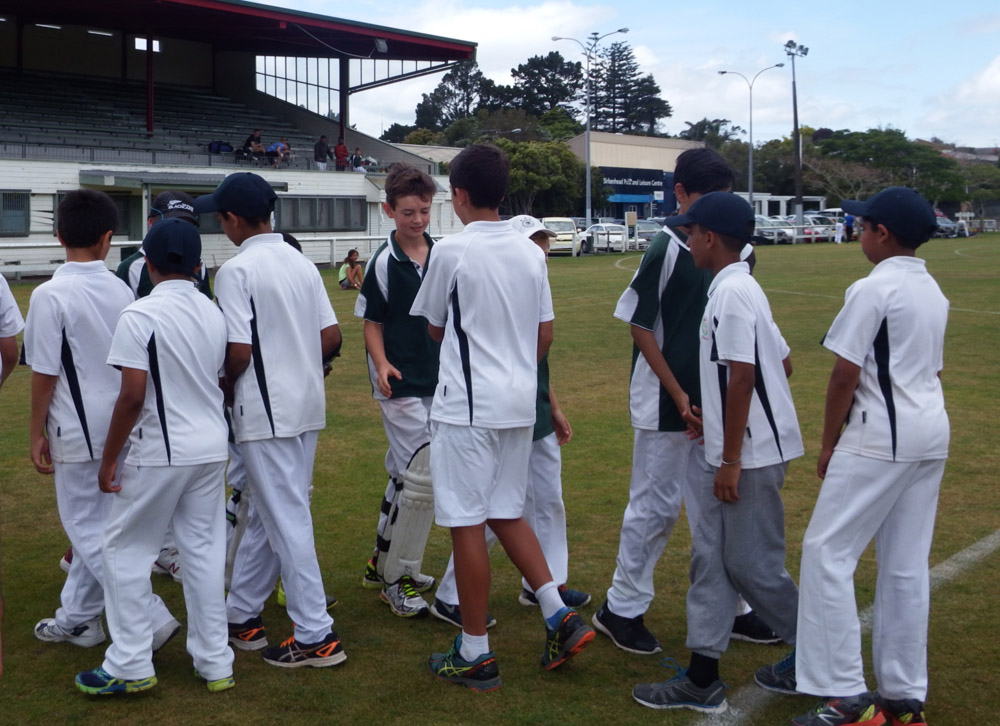 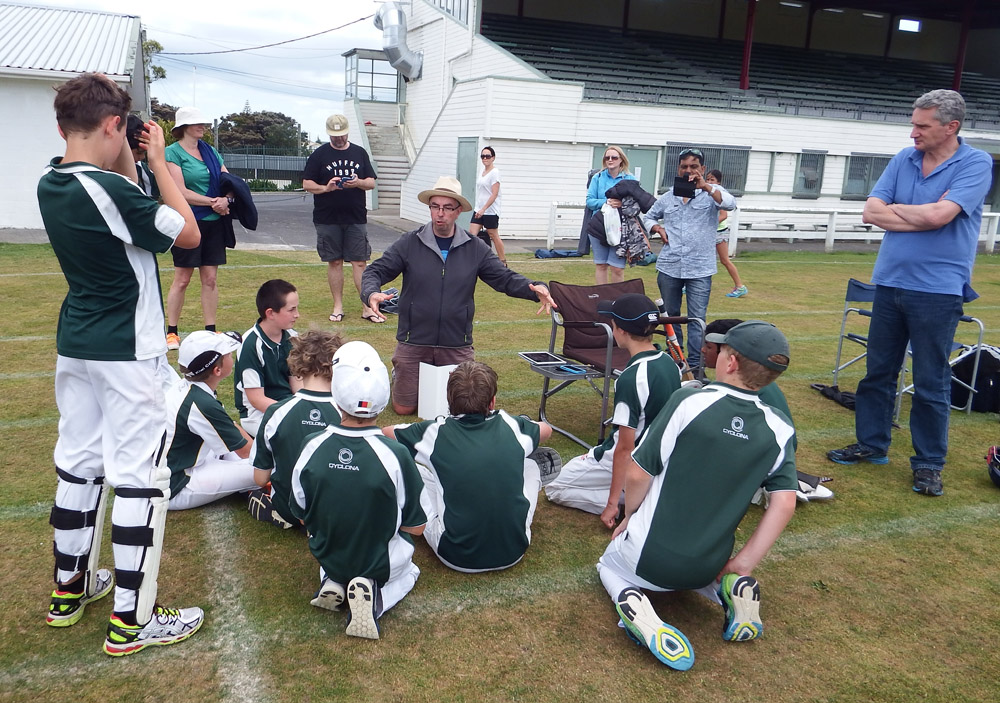 Gathering round to hear coach Andy. 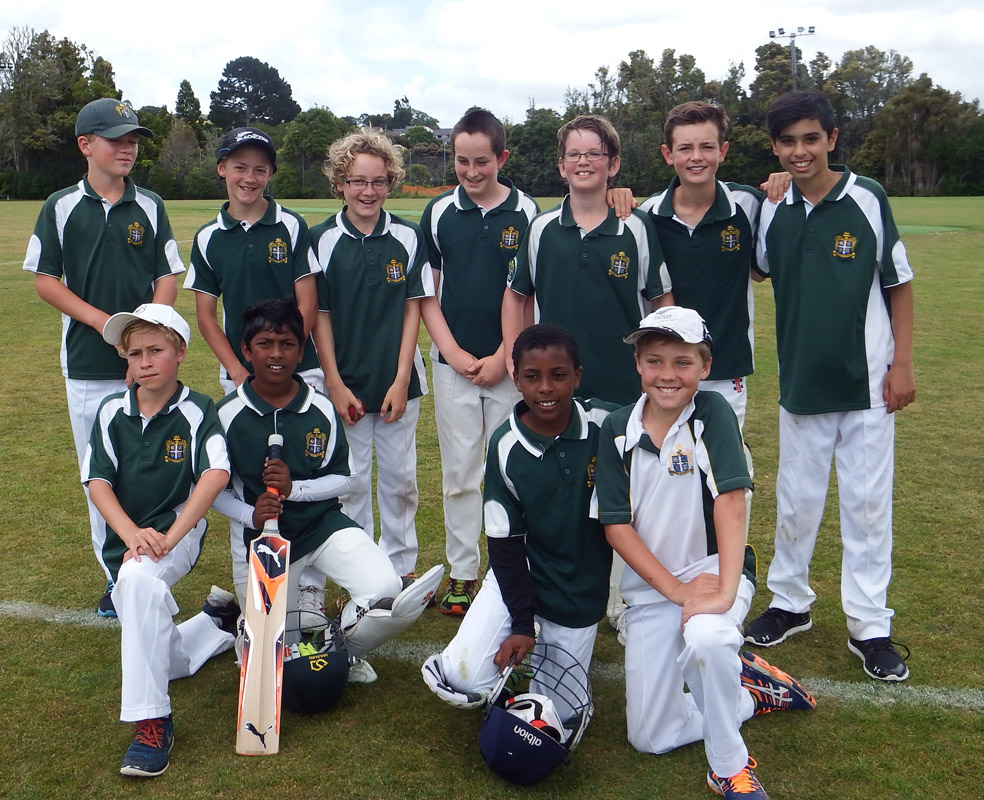 There were some excellent results leading into the last game before Christmas and some really good efforts. There were disappointments too, not the least was the fact the Dragons didn’t get a game this week. The picture gallery this week is from the Pacers’ game.

The Vikings took on ECB Junior Black Caps at Freyburg.
It was a tense match, with the maths at the end seeing us end up with 160 to 133 to record our first win!
Batting we had scored 95 to their 93 but the difference was the number of wickets we took – 13 to their 8.
Harry and Josh got us off to a good start with a partnership of 34 runs.
A big thanks to the talented Jackson for helping out and making sure we fielded a full team.
Our fielding was exceptional this week, although we did drop a few high catches which gives us something to work on.
Three of our bowlers took 3 wickets, with a special mention to Jared who took 3 for 7.

All in all a brilliant team performance, played with plenty of energy and good sportsmanship. (Report, Greg Hart)

Another great win for Curtling, who are really on fire! This time it was against the previously unbeaten East Coast Bays Superkings, played at Kaipatiki Park.
ECB sent us in to bat first and we saw immediately that they are a very strong bowling and fielding side. Jasper Watson and Abdur Rehman made a slow and careful start against some testing bowling. After five overs they began to pick up the pace and took the team right through to 84 after 19 overs, at which point they both retired on 30 runs.

After this great start we then lost two wickets for just 9 runs. Harry Price was unlucky to be run out without facing a ball and Dominic Hawkins was also out for a duck thanks to a fine catch. Connor Muirhead (11) and Alex Godward (22) then formed another good partnership and we finished on 126 for four.

East Coast Bays also made a good start in their batting and kept up an excellent run-rate until drinks. At the halfway point (14 overs) they had more than half the runs needed (68) but had also lost half their wickets. Their remaining batsmen succumbed to the relentless pressure from our bowlers and some excellent wicketkeeping. They were all out for 92 off 20.3 overs, a win to Curtling by 34 runs.

The team’s key focus for today’s game was to reduce the number of extras they conceded and they achieved this. They lost the toss to North Shore Potter
and went in to bat first. Jackson Walsh and Sam Hazeldine both retired on 30, both hitting their runs from 28 balls and both hitting five fours.

Shivam had the best figures with 3 overs, 2 maidens (including a wicket maiden) and 2 for 3 while Rupert was also strong with 2/11 (almost a hat-trick) and the other wickets were shared around Tom, Liam and Jackson. The team worked hard and bowled out the opposition in the 28th over for 98 runs.

Tom also had a great day in the field with a catch and  a runout after firing the ball in while running at speed.

Thanks to Shiv’s brother for playing for the team once again today and the happy boys look forward to their last game before Xmas. (Report, Tina Walsh)

A very disappointing result today for the Dragons who were sitting in third place on the table and feeling confident of a win to take them up a rung and play in the final against Auckland University Hit n Runners. However the other University side in the grade, Auckland University Ferns, chose to default today meaning it is now almost impossible for the Dragons to get enough points to play in the final. Very disappointing for the girls who have really come into their own in the past few games.

(Picture Gallery is all from the Strikers game)

The boys lost the toss (yet again!) under an ominous grey sky but luckily were put in to field because the visitor, Suburbs New Lynn, were waiting for most of their players to arrive. Spike opened our bowling with his usual blistering pace, followed by Joe Fell who set a high standard by bowling their opener with his first ball. His next five deliveries were dot balls to earn him a wicket maiden.

The other opener and the number 3 dug in and played defensively until they were both retired not out in the hope of increasing the run rate. Ben bowled the next batsman for 2, and their next was looking dangerous until Shayan caught him off Orlando for 14. Vivek caught their next for a duck off William and then Joseph bowled their number 7 who had been looking threatening with 17 runs from 13 balls.

Jeremy was brought back to bowl his third over of offspin, which led to their next batsman being caught by Orlando for 1. Shortly after it was the end of the Suburbs innings at 137/6. It didn’t look too high a target, but based on recent form it was no time to be complacent.

William and Nathan Kenny (known as Kenny) opened for us but the first couple of overs saw only extras as they settled in. Then Kenny was caught for a duck so Spike came to the crease. William dug in, but Spike played a dangerous shot and was caught for 4. Captain Shayan replaced him and was looking good until he was run out on 6. William was retired not out on 6, leaving the usually big-hitting pair of Joseph Reid and Vivek Patel to pick up the pace. At this point we were 30/3 off 10 overs so it wasn’t going to be easy. Vivek set the tone with a four on his first ball, and he and Joseph batted brilliantly together for a partnership of 110 (Vivek 44 n/o, Joseph 35 n/o) to win the match with 2 1/2 overs to spare.

Great performances from the team today, but again the boys needed to tighten up their bowling, giving away 70 extras compared to just 41 by Suburbs New Lynn. Wickets were shared around today. Man of the match was Joe Fell who has played consistently through the season to date and ended up with figures of 3 overs, 2 maidens, 1 wicket for 3 runs.

Birkenhead Strikers took on East Coast Bays at Bay City Park and winning the toss elected to bat. They did so patiently against some good ECB bowling. The top batsmen were Travis Gower (26), Harry Carter (26) and Jesse Hohaia (24) but despite their reasonable tallies we only had 133 in the bank when we were all out in the 40th and final over.
This was always going to be a challenge to defend and with two of the ECB players knocking 50s, it proved not enough. Despite some hard work in the field, East Coast Bays cruised past our total in 25 overs, for the loss of only one wicket, taken by Travis who ended with 1/14.
Scorecard
Categories
FeatureGallery
Tagged
junior cricket birkenhead
0