The story behind the cricket game in torrential rain

When you play social cricket you learn to expect to play in some conditions that our more ‘distinguished’ colleagues wouldn’t consider playing in. Over the years I’ve played many games in drizzle and light rain. This isn’t always the most enjoyable experience as it gets pretty cold, the ground is slippery and the ball turns into a cake of soap. As a general rule if you bowl in the rain and the opposition doesn’t you’ll lose 9 out of 10 games.

On February 27, the One Day 3B side, ended up playing one of ‘those’ games.

Oratia won the toss and (knowing weather was coming) elected to bowl. The ball was swinging for pretty much all of the innings and we ended up just shy of 200 from our 40 overs, maybe a little under par but very defendable. The sun was blazing away the entire time.

A quick turnaround and we go out to field. The first few overs go well, then the drizzle starts. We field for 14 overs, with a ball that is basically useless at this point; we have them 3 down but they’re on 110 already. At this point the drizzle turns into rain and (after a few nudges from other team members) the captain makes the call that enough is enough and we’re going off.

After 10 minutes off the field, the rain has stopped but it’s still drizzling. The Oratia batsmen and umpires walk out to the middle and look at us as if they are saying “why aren’t you already out here?” Once they realise we aren’t too keen to go back out, their captain walks over and after a brief discussion the decision is made we’ll start up again. Some of the team can be heard muttering under their breath; “bloody social cricket, I’m too old for this”. Four and a half overs later the rain comes down heavily again, the opposition is 4 down now but has moved on to 130.

As we again head for the sidelines plenty of complaints can be heard from the Oratia batsmen. They seem convinced that we should bowl 9 more deliveries (to make 20 overs) so that it ‘constitutes a game’. I calmly (calmly may not be totally accurate) inform them that they are wrong, the rules state if it is rained off it’s a draw, irrelevant of how many overs were bowled. This doesn’t seem to convince them but they aren’t left with too much choice as we wander off the field.

Five to 10 minutes later the Oratia captain comes over. He explains that their club has a rule that statistics don’t count unless they get through 20 overs. One of their side got 6 wickets and won’t get his place on their honours board if the game doesn’t go to 20 overs. We stated we were happy to just put it in as 20 overs so they can get their statistics. However he then said that he’s on the board at Oratia and given there was another Oratia side playing next to us (having somewhat heated arguments with their opposition about the rain) he didn’t want to set a bad example. He asked if we would mind just bowling 9 more balls. 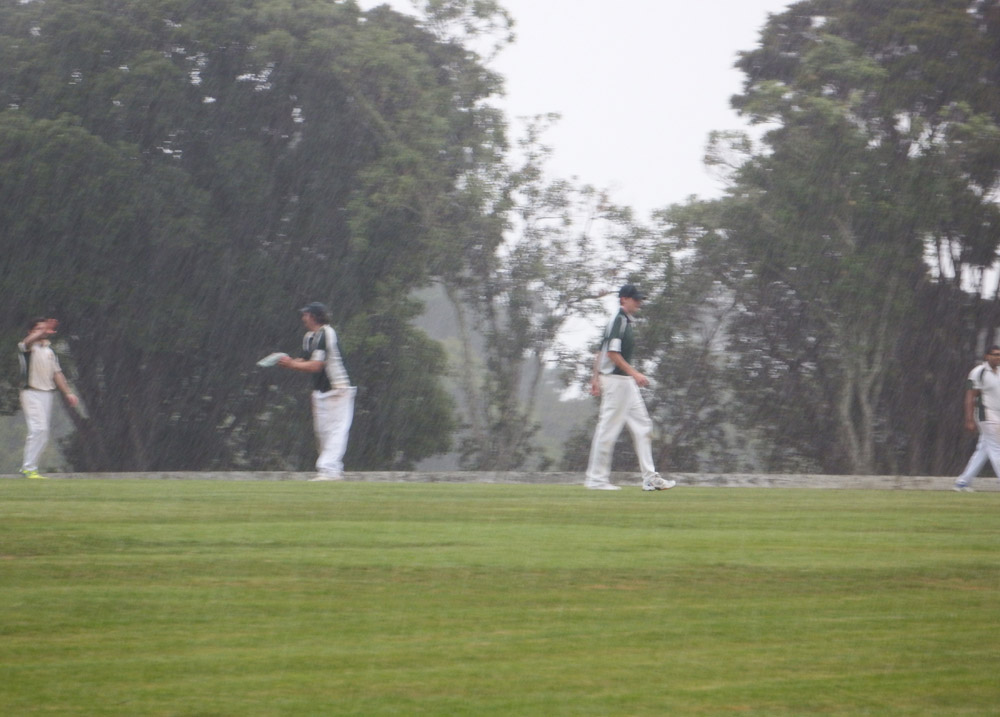 So at this stage it is raining heavily. There are puddles all around the field, including right on the edge of the pitch in the bowler’s run-up. It’s slippery, the ball is impossible and we’re already pretty wet. Out we walk to the middle in what must be the worst conditions I have ever played a game of cricket in. There’s about 40 people watching/laughing from the grandstand and the clubrooms, most of whom think (rightly so) that we’re idiots. I instruct the batsman “if you hit the ball off the square we’re gone”. So the 9-ball blockathon commenced. We set an aggressive field with everyone (excluding the bowler) within 5 metres of the batsman. When he clipped one down to fine leg (and didn’t run) he got a massive boo from the crowd (and us). The final few balls of the match had the crowd in raptures cheering every ball that was ‘lobbed’ down to the heroically defensive batsman.
That ends the tale of the wettest game of cricket I’ve ever seen. After the game, the Oratia side came back to the bar and were very appreciative. They even shouted us a few beers, which is by far the best way to get into our side’s good books. Sometimes you leave a cricket game feeling good because you got a few runs or took a few wickets. Sometimes because your side got the win from a seemingly impossible position. This time we felt good because we played social cricket as it should be played, in the ‘spirit of cricket’, if you will.

Finally, congratulations to the guy who we don’t know, who now has his name on an honours board we’ll never see … wait, why did we just get drenched again?